An incredible gesture following the most amazing gift of life - a recording of their child's heart beating in his chest. 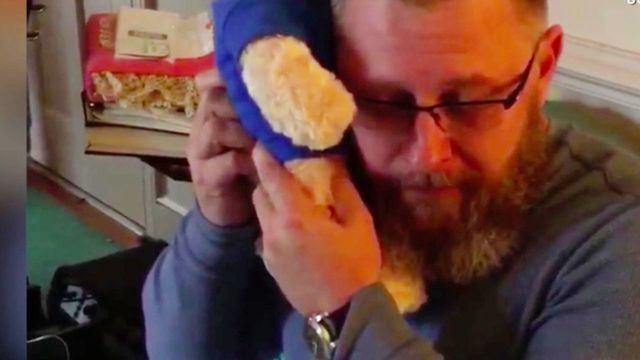 An incredible gesture following the most amazing gift of life - a recording of their child's heart beating in his chest.

A Massachusetts man, Robert O'Connor, who received a new heart following the tragic death of a 16-year-old Virginian, Dakota Reid. The Irish American celebrated the amazing gift of organ donation by sending Reid's grieving parents a most amazing gift - a recording of their child's heart beating in his chest.

O'Connor was flown to Tuft's Medical Center, in Boston, and was on life support due to a heart condition he suffered from until he learned he would be given a new heart.

He said the gift he received from the Reid family has been life-changing and he found a creative way to thank the teen’s family using a Build-a-Bear teddy. O'Connor said that while he plans on meeting the Reid family in the future this incredible gift gave them something to hold on to.

John Reid made the hard decision to donated his son's organs following a tragic car crash in 2019. And recently he opened this box. The video is truly amazing:

On Facebook, John said, "When I got the bear, my heart was filled with joy. I did not expect any of this...  I never left Dakota's side. At night I would lay my head on his chest for hours at a time, every night, listening to his heartbeat. Now, thanks to Bob, I can list [sic] to his heartbeat again!"

He continued "When they said, 'It's time,' they rolled him out and we followed... When we turned the corner, both sides of the hallway was [sic] lined up with nurses, doctors and staff as we walked between them in Dakota's honor to the OR to say our final 'see you soon.'"

John told CBS News he now speaks to O'Connor daily about the importance of organ donations. Now they both home tp spread the word on the good it can do.

"To give the gift of life is to continue God's plan for both the donor families and the recipient.

"We want to share our stories to promote organ donations and show families how it really helps the donor families with healing and closer [sic] to know their love [sic] on lives on."

O'Connor is not the only person that Dakota Reid's cut-short young life helped. John has been contacted by a farmer who received his son's kidney and pancreas, as well as a 21-year-old man who can now see thanks to his son's eyes.

"It was so comforting and fulfilling to know he lives on," John said.

"It has helped us so much to know he helped save lives. It is the best healing and comfort I could ever ask for. For sure, it is a part of God's plan."