Cameron Gallagher of Virginia collapsed shortly after crossing the finish line of her first half marathon. 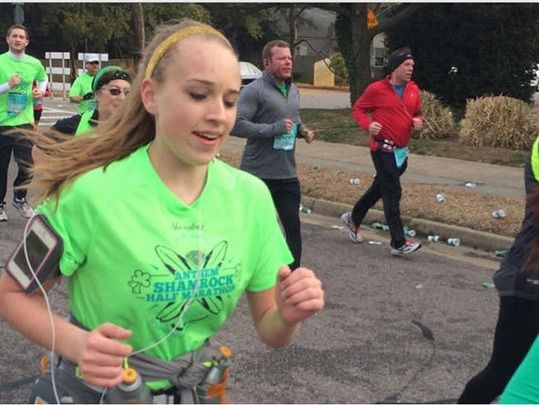 Cameron Gallagher running in the Virginia Beach Shamrock half Marathon. She collapsed after crossing the finish line and later died at an area hospital. Handout

Just after crossing the finish line of the Virginia Beach Shamrock Half Marathon on Sunday, 16-year-old Cameron Gallagher collapsed.

The Richmond-area teen, an accomplished swimmer, had just completed her first half marathon in two hours and 19 minutes with her best friend Abby Donelson by her side. Her parents, David and Grace, who had been cheering her on, rushed over when she fell to the ground.

Gallagher was carried to the EMS tent and then rushed to a local hospital, where doctors were unable to revive her. She died close to 11 am, an hour-and-a-half after she lost consciousness.

The cause of death has not yet been officially released, but it is believed to have been cardiac arrest.

The website Runners World released an article stating that on the same day another half-marathoner in England died after crossing the finish line, while double Olympic gold medalist Mo Farah required emergency resuscitation after collapsing after finishing the New York half marathon.

Friends and family of Cameron expressed their tremendous grief and shared stories of her inspiring life.

“Grace and I were given a gift to be with her during her accomplishment and we were with her in end,” David said in a statement. “Please use Cameron’s story as an inspiration to set goals, overcome obstacles and fight the good fight. She did that every day.”

One of five siblings, Cameron was a student at Douglas S. Freeman High School, where she was a champion swimmer. Wanting to take on a new challenge, she began training for the half marathon nine weeks ago with Donelson.

She was also organizing the Speaking Up 5k, a charity race for suicide awareness scheduled to coincide with National Depression and Anxiety Week in May. The night before the Shamrock Half Marathon, she posted the following on Speaking Up 5k Facebook page:

Her friends have announced that they will continue organizing the race in Cameron’s memory.