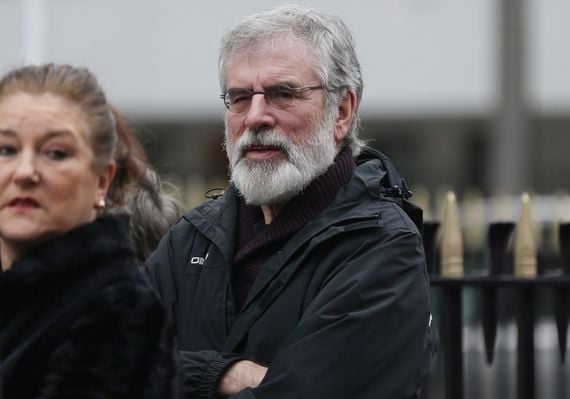 Gerry Adams is objecting to the proposed redevelopment of the site of the 1916 Easter Rising surrender on Moore Street. Rolling News

Former Sinn Féin President Gerry Adams has opposed plans by a British company to redevelop an area of Dublin City that includes part of the Easter Rising battleground.

The buildings were the site of the Irish surrender in 1916 and Adams said that the proposed development did not adequately recognize the historical significance of the area.

"Moore Street holds a special place in the history of Ireland," he told the Sunday Times.

"It was in Moore Street and the surrounding streets and laneways and at the nearby GPO that a fierce battle was fought between the 1916 republican forces and the British army. No 16 Moore Street was where five of the seven signatories of the proclamation held their last meeting before the surrender."

He said that relatives of the signatories of the Proclamation of Independence have been campaigning for more than two decades to preserve the site on Moore Street and have it designated as a national monument.

Adams said that the Hammerson proposal fails to protect the site and that it proposes the demolition of a building that played a key role in one of the most important events in Irish history.

"The applicants seek the demolition of 18 Moore Street, a 19th-century structure and other 1916 monuments, buildings, and structures that have yet to be independently assessed or surveyed," he told the Sunday Times.

"It ensures the area around 14–17 Moore Street, a national monument due to its role in the Easter Rising, is appropriately restored as part of this landmark destination," the company said.

Dublin City Council is due to make a decision on Hammerson's first three applications by August.

However, there has been significant opposition to Hammerson's proposals.

A group calling itself the 1916 Relatives Moore Street Initiative has lodged several objections to the proposal, while Independent MEP Clare Daly has also objected to Hammerson's project on the basis that the company has not "secured and preserved all of the 1916 elements".

Sinn Féin have also raised concerns over the proposals.

Aengus Ó Snodaigh, a TD who sits on the Moore Street Advisory Group, said that the group does not support the proposed alteration of key sits in the 1916 Easter Rising.

"We do not support the proposed break in the terrace 10-25 Moore Street, the demolition of key buildings, or the removal of the original line of the lanes and premises where the 1916 GPO garrison occupied, fought, and died," Ó Snodaigh said in a statement.

Taoiseach Micheál Martin, however, said that the plan will "enhance the status of O'Connell Street. The Taoiseach said that the proposal will develop new transport links and deliver new homes and retail facilities, boosting employment in the area.

He said that the Government had already designated funding to protect 14-17 Moore Street and said that the funding would go toward new visitor and exhibition facilities to the rear of the buildings.