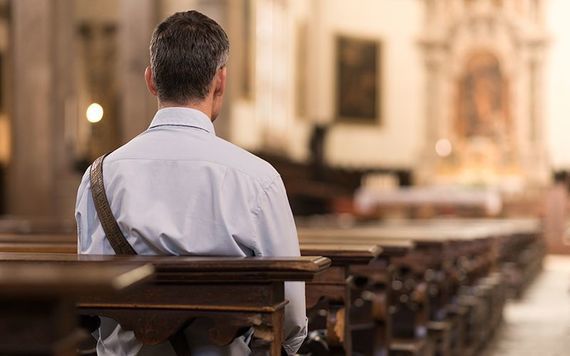 Places of worship have been forced to move religious services online during the Irish Government's Level 5 restrictions. Getty

Irish police have issued a last warning to an Irish priest who has been holding mass during the COVID-19 pandemic, arguing that God will protect his parishioners from the coronavirus.

Fr. PJ Hughes, a Catholic priest in Mullahoran, County Cavan, has defied the Irish Government's COVID-19 legislation by keeping the doors of his church open during the Level 5 COVID-19 restrictions.

Fr. Hughes said previously that he "could not accept" the Government's decision to close places of worship for six weeks and move services online as it would be "an insult to the people".

The priest described the Irish Government's COVID-19 regulations as akin to "living in a police state" and pointed out that he was not forcing anyone to go to mass. Anyone who chose to attend his service would be protected by their faith, he said.

"It’s people’s free choice to practice their faith - people who don’t want to go to church don’t have to go - but the people who do want to; their faith will carry them through," Fr. Hughes told Claire Byrne on RTÉ Radio One.

"I would say to that scientist that he is wrong. God has healed people and he has even raised people from the dead. God can heal and cure the greatest and worst diseases and he has done," he said.

Fr. Hughes additionally told Shannonside Radio on Thursday that a Garda sergeant had arrived at his church with a colleague on Sunday after he went ahead with Sunday mass to inform that he had broken the law.

He said that he told the gardaí that he wasn't aware that there was "a law against people practicing their religion" and that it was protected under the constitution.

However, he said that the Garda sergeant told him that this was his last warning and that he would be prosecuted if he celebrated mass again with people in the church.

The gardaí told him that they would send a file to the Director of Public Prosecutions and that he would face a penalty of €2,500 or six months in jail.

Fr. Hughes additionally said that he had been contacted by Bishop Francis Duffy of Ardagh and Clonmacnoise, who warned him that he was in "dangerous territory" by remaining open during the lockdown.

Fr. Hughes said that he listened to what Bishop Duffy had to say but that he didn't promise to stop saying mass, arguing that people and God were more important to him than the Irish Government's regulations.

He said that he has urged Bishops to appeal for the re-opening of churches during the COVID-19 pandemic and told Shannonside that forcing them to remain closed was "an insult to people’s faith and an insult to God".