The woman was pushed into Dublin's Royal Canal after she confronted a group of boys about a racist comment. 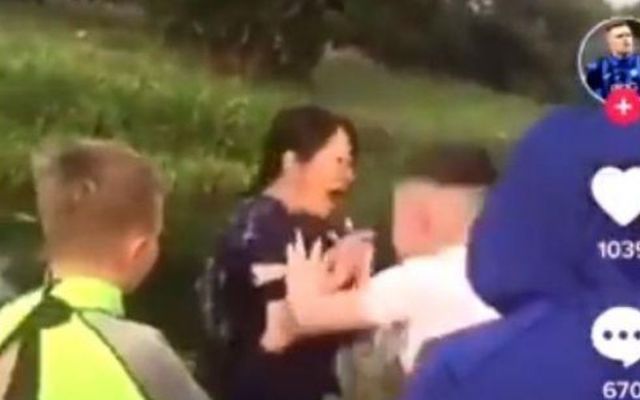 A still from the video which captured the racist incident. @unakavanagh Twitter

Gardaí are investigating a racist attack in Dublin after a video emerged Friday showing a group of boys pushing an Asian woman into the Royal Canal.

The video, which was posted on two separate Tiktok accounts on Friday, shows the woman confronting the group over a racist incident that appeared to take place off-camera.

She can be heard telling the group "not to racially discriminate, that's criminal" before some of the boys pushed her into the canal.

The group can then be heard laughing as the woman screamed in shock.

The video has been deleted off Tiktok along with the two accounts who originally posted it, but it has been widely circulated on other forms of social media.

Xuedan (Shelley) Xiong, the woman attacked in the video, pulled herself out of the water with the help of a passerby, and told the Irish Times that she was unhurt.

However, she said that she is now afraid to leave her house alone.

Xiong said she was walking along the canal between Castleknock and Ashtown in County Dublin at around 7 p.m. on Friday evening when a group of boys raced at her on bicycles as if to push her into the canal.

She said she screamed and the boys mocked her by imitating her scream.

Xiong then told the Irish Times that a second group of boys approached her as continued along the canal. She said one of the boys looked her in the eye and said "coronavirus" before winking at his friends.

She then said that she was approached by a third group, including some boys from the earlier encounters.

The third group shouted racial slurs like "Chinese noodles" and "fried noodles", according to Xiong, prompting her to chase after them and confront them.

It was then that Xiong was pushed into the canal and gardaí have confirmed that they are investigating a "racially motivated incident" which occurred on Friday, Aug. 14 in Dublin 15.

The Irish Times has since reported that gardaí know the identities of two of the boys involved in the attack, but the teenage boys are unlikely to face charges.

Gardaí intend to speak to the boys in the near future and caution them under the juvenile liaison program but are unlikely to charge them with assault due to their age.

The boys would escape without a criminal record if they are cautioned.

A number of politicians have condemned the incident, including Lord Mayor of Dublin Hazel Chu, who said that her "heart went out" to Xiong.

"My heart goes out to the assaulted woman Shirley Xuedan Xiong," Chu wrote on Twitter. "Make no mistake this was an assault. I'll be contacting Garda Commissioner this week on the Community Garda Program. This is far from the first assault case on the canal stretches. Let's work to making it the last."

My heart goes out to the assaulted woman Shirley Xuedan Xiong. Make no mistake this was an assault.

I'll be contacting Garda Commissioner this week on the Community Garda Program. This is far from the first assault case on the canal stretches. Let's work to making it the last. https://t.co/XWehNaN40S

Tanásite Leo Varadkar said that the incident was "really upsetting to see" and said that no one should live in fear of leaving their own home.

"Really upsetting to see. It shouldn’t take bravery to go for an evening walk. We should all be ashamed this happened to Ms Xiong. We must do everything we can to support victims of hate crime and stamp out racism," Varadkar wrote on Twitter.

Minister for Further and Higher Education Simon Harris, meanwhile, said that the video was "appalling and deeply upsetting".

"No place for this in Irish society," Harris continued on Twitter. "We must call out racism any time it rears it’s ugly, repulsive head. No child is born a racist - we need to face up to that reality too. We all have a role to play."