The footage of revelers in Ireland's capital city just hours before Level 5 came into effect has sparked outrage online. 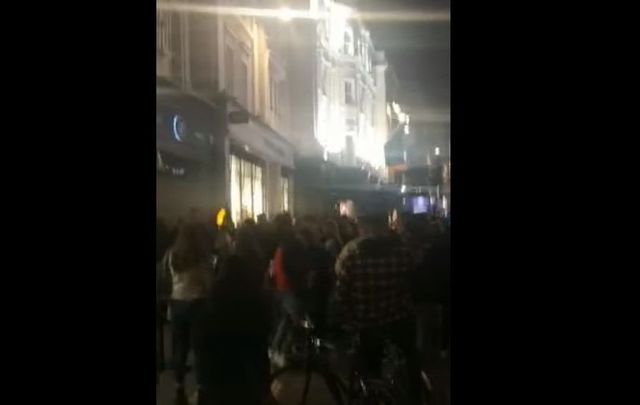 The crowds danced to live music on Dublin's main shopping street while some enjoyed alcoholic beverages, prompting members of An Garda Síochána to break up the impromptu gathering.

The incident, which peaked at around 9:30 pm on Wednesday evening, was not an organized event, according to the gardaí.

Gardaí told the Irish Times that most people in attendance appeared to have stopped to watch a street performer, causing more passers-by to stop and swell the ranks of the crowd.

Gardaí also told the Irish Times that some attendees were drinking as they enjoyed the music, although most in attendance were not drinking alcohol and appeared to have stopped on "the spur of the moment" to enjoy the music.

Most of the crowd moved along when on-duty members of An Garda Síochána arrived to break up proceedings, but the incident was still subjected to widespread criticism and condemnation on social media.

Grafton Street on Wednesday night. The last days of Rome! We get what we deserve. #COVID19 #IrelandLockdown pic.twitter.com/bXm0CCjTgb

Ireland is currently enduring its second wave of the coronavirus, regularly reporting more than 1,000 new cases a day, and the Irish Government has implemented a number of strict measures to contain the spread of the virus.

The Level 5 measures, which came into effect at midnight on Wednesday night, have caused pubs and restaurants to close all over the country in addition to non-essential shops like clothes shops.

The new restrictions also require people to stay within 5km of their own home and eliminate almost all social interactions, prompting the outrage on social media over the scenes on Wednesday night.

Grafton St (Dublin) at 21.30 this evening apparently. Two and a half hours before lockdown. (Credit: unknown) #COVIDIOTS