Calls for Dublin venue to shut down after shocking footage emerges

The footage appears to show the pub's barman pouring shots into people's mouths as the crowd below dances in close quarters. 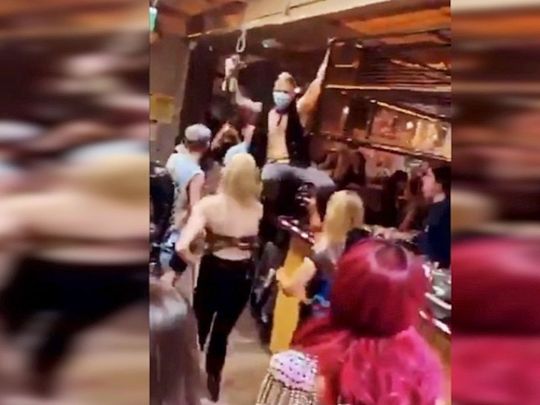 A barman appears to pour a shot into a customer's mouth at Berlin D2 in Dublin. Noel Rock Twitter

A Dublin venue is facing widespread criticism and calls to shut down after footage emerged of customers and staff not adhering to COVID-19 regulations in a party-like atmosphere.

The Licensed Vintners Association (LVA) is calling for Berlin D2 on Dame Lane to close down after footage appeared to show the venue's barman standing on top of a bar pouring shots into people's mouths as the crowd below danced in close quarters to loud music.

The video has been widely circulated on social media and is believed to have come from a brunch event at the Dublin venue.

Customers Berlin D2 told RTÉ News that social distancing measures were originally being applied in the venue with tables set two meters apart and customers asked to stay in assigned areas marked by tape on the floor.

However, the customers said that social distancing measures "disappeared" as the music became louder and the atmosphere became crazier.

The LVA, an association that represents pubs in Dublin, described the scenes as "outrageous and appalling".

Berlin D2 is not a member of the association and the LVA claimed that the establishment should be closed down immediately.

"That business should be shut down immediately. It is not a pub and does not hold a pub license," an LVA spokesperson said on Twitter.

A number of prominent politicians have slammed Berlin D2 and condemned the footage since it emerged on Saturday night.

Minister for Health Stephen Donnelly said that people "were rightly sickened" by the scenes and described the scenes as "reckless".

In a post on his personal Twitter account, Donnelly said: "The vast majority of Irish people have sacrificed a huge amount to help suppress this virus. They’ve shown huge solidarity. People are rightly sickened by these scenes. The reckless actions of a small few can have huge repercussions on everyone else."

Minister for Higher and Further Education Simon Harris, Donnelly's predecessor as Minister for Health, described the footage as "shameful" and a "kick in the gut" to everyone in Ireland.

A right kick in the gut & middle finger to everyone in our country who has worked so hard & sacrificed so much, to everyone who has lost a loved one or been sick with #Covid19, to every frontline worker and to every responsible business owner who have suffered so much. Shameful https://t.co/g16bwoEn16

Former Fine Gael TD Noel Rock, meanwhile, was among the first to share the footage on Saturday night and described it as an "absolute disgrace."

Rock went on to call the footage a shambles and called for the venue to be shut down.

This is supposed to be a bar in Dublin 2 tonight. If accurate, it’s an absolute disgrace and an insult to the efforts and sacrifices of many - pic.twitter.com/11qPECMMA9

Irish restauranteur Jay Bourke, who is involved with Berlin D2, said that he was "absolutely mortified" by the footage.

In an interview with RTÉ, Bourke said that the footage was not a fair reflection of Berlin D2 and put the scenes down to "20 seconds of madness".