Miami-Dade Mayor Daniella Levine Cava told a news conference Friday that more than 150 people are still unaccounted for following the collapse of a 12-story apartment block in a Miami suburb. 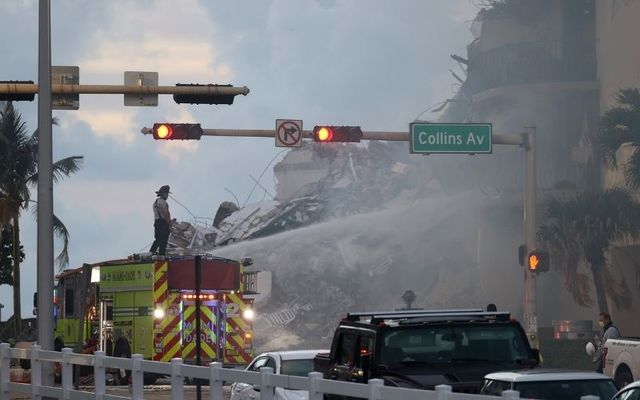 Search and rescue teams respond to the collapse of a 12-story tower in Surfside, Florida. Getty

At least four people have died following the collapse of an apartment block in a Miami suburb on Thursday morning, while 159 people are still unaccounted for.

President Joe Biden has approved an emergency declaration in the state of Florida and ordered federal assistance to supplement local and state response efforts following the collapse.

"The President's action authorizes the Department of Homeland Security, Federal Emergency Management Agency (FEMA), to coordinate all disaster relief efforts," the White House said in response to the collapse of a large section of Champlain Towers South condominium in Surfside on Thursday morning.

Four people have been confirmed dead and 159 people are still unaccounted for following the collapse of a Florida apartment block. Miami-Dade Mayor Daniella Levine Cava said it has been a ‘tragic night’. | Read: https://t.co/cosEZhMvS4 pic.twitter.com/U4Jh2k1LoX

Authorities are unsure of how many people were in the building at the time of the collapse.

Miami-Dade Mayor Daniella Levine Cava told a news conference on Friday that 120 people had now been accounted for since the incident but said that more than 150 people are still unaccounted for.

"We do have 120 people now accounted for, which is very, very good news. But our unaccounted for number has gone up to 159," Levine Cava told a news conference.

On Thursday, search and rescue teams detected banging sounds and other noises but were unable to detect any voices coming from the mounds of rubble that have built up since the collapse.

The Champlain Towers South building suddenly collapsed at about 1:30 a.m. EST on Thursday, according to footage from a local security camera.

The footage captured an entire side of the 12-story tower suddenly folding in two sections, throwing up huge clouds of dust.

Authorities said that the 40-year-old building was undergoing roof construction and other repairs at the time of the incident but did not say whether this caused the collapse.

Meanwhile, a researcher at Florida International University said that the building has been sinking into the ground since the 1990s in an attempt to explain Thursday's sudden collapse.

#MDFR #FLTF1 conducting search and rescue operations in the rubble of the #SurfsideBuildingCollapse. Heavy machinery is being used in order to carefully lift and move around debris to access search areas. pic.twitter.com/Ol2Ok6v4a0

About 80 of the tower's 130 apartment units were occupied at the time of the collapse.