Up to 80 firefighters were fighting the blaze at O'Doherty and Sons Coffin and Casket manufacturers in Strabane after it broke out on Sunday afternoon. 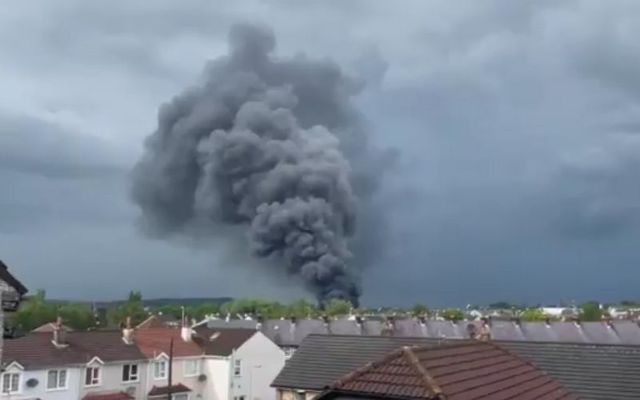 Smoke rises from the blaze in Strabane. Raymond McCarron Twitter

A large fire has broken out at a coffee factory in County Tyrone after it appeared to be struck by lightning.

Up to 80 firefighters were fighting the blaze at O'Doherty and Sons Coffin and Casket manufacturers in Strabane after it broke out on Sunday afternoon.

However, Northern Ireland Fire and Rescue Service (NIFRS) said that it was able to scale back efforts to tackle the blaze on Monday, although local residents have been advised that the area will remain cordoned off "for the majority" of Monday.

NIFRS said that 10 pumping appliances and four specialist vehicles were used to bring the blaze under control on Sunday afternoon and advised members of the public to "keep windows closed".

The fire service is currently investigating the cause of the fire and hopes to conclude the investigation within 24 hours.

Eyewitnesses in the area reported seeing a lightning strike moments before the fire.

Earlier on Sunday, the UK Met Office had issued a weather warning for Northern Ireland stating that there was a risk of lightning, heavy rain, and hail showers that "could cause damage to property and travel disruption".

NIFRS District Commander Andy Russell told BBC Radio Ulster that it would be an unusual case if a lightning strike started the fire.

O'Doherty and Sons has operated in Strabane since 1908 and is a major employer in the town. A former employee told the Irish Times that "hundreds and hundreds" of coffins are stored in the factory's warehouse and said that it would be like a "tinder box".

Smoke from the fire could be seen from 25km away.