The accidental discovery was made during land improvement work on the Dingle Peninsula in County Kerry and the uncovering was described as "highly unusual." 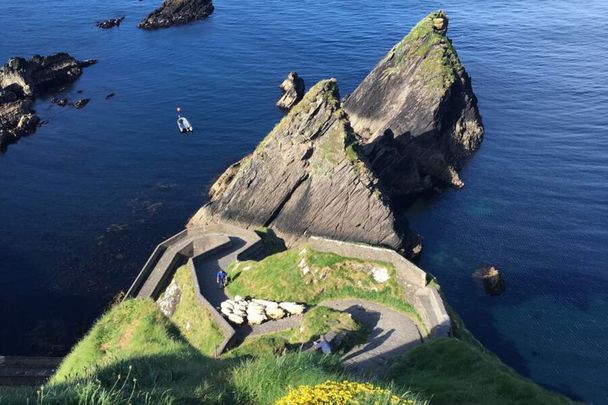 The ancient tomb was discovered on the Dingle Peninsula Tourism Ireland

A pre-historic Bronze Age tomb was uncovered by a farmer on the Dingle Peninsula in County Kerry earlier this year.

The incredible discovery was made during land improvement work, when a digger upturned a large stone slab revealing a slab-lined chamber beneath.

On closer inspection, an adjoining sub-chamber was found at what appeared to be the front of the tomb. The tomb contained an unusual smooth oval-shaped stone and what is believed to be human bone. It is believed the tomb may be from the Bronze Age but it could be even earlier as there is a number of highly unusual features displayed.

Smooth Oval Stone found in very recently uncovered prehistoric tomb in Co Kerry, Ireland. Archaeologists give initial estimate that tomb is bronze age 2500 to 5000 BC but tomb yet to be surveyed. https://t.co/2SPEE9MvXi pic.twitter.com/k7ohYpPsuT

The Bronze Age in Ireland lasted from about 2000BC to 500BC and was a period of time that was noted for its burials in wedge tombs and the crafting of bronze.

Wedge tombs consist of a single stone chamber covered with earth. A significant number of wedge tombs have been found in the southwest of Ireland, archaeologists are unsure why but they may represent the alignment of the moon.

Local archaeologists in the area described the tomb as “untouched” and “highly unusual” and that the find could be invaluable to our understanding of pre-historic burial rituals.

Archaeologist and place names expert Dr. Breandán Ó Cíobháin explained that "this tomb appears to be completely untouched and in its original state and contains human remains. That is very rare. It is an extremely significant find as the original structure has been preserved and not interfered with, as may have occurred in the case of other uncovered tombs."

Archaeologists from the National Monuments Service and the National Museum of Ireland visited the site to carry out an initial survey. It is understood the oval-shaped stone was removed for safekeeping.

Due to the vulnerable condition of the tomb and concerns that people visiting the site may cause further damage to the structure, the exact location of the site has not been revealed.