The Taoiseach was speaking at Ireland's National Famine Commemoration in Strokestown, County Roscommon, on Sunday afternoon. 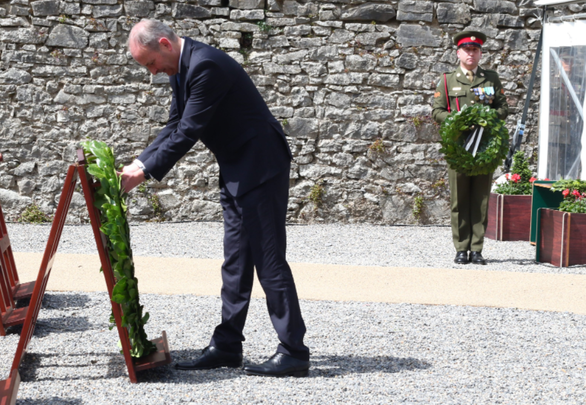 Taoiseach Micheál Martin has described the Great Hunger of 1845-1852 as the most devastating and traumatic event in Irish history.

The Taoiseach was speaking at Ireland's National Famine Commemoration in Strokestown, County Roscommon, on Sunday afternoon and told the crowd that it was impossible for people today to imagine the feelings of hopelessness and loss experienced by victims of the Famine in the mid-19th century.

Sunday's ceremony included military honors and a wreath-laying ceremony by ambassadors to Ireland in honor of all those who suffered or died during the Famine.

Martin told the crowd that Ireland had avoided further famines by building a democratic state, arguing that famines did not happen in a democracy.

"Famines do not happen in democracies. In fact, there is no recorded account of a famine in a country where the government is freely elected and there was free speech," he said.

"I think if you want to know why Ireland didn't have another famine you will find it in our commitment to self-determination and building a democratic state."

The Taoiseach also praised the descendants of Irish famine victims for responding to the needs of the people of Ukraine following the Russian invasion in late February.

"As we come together to honor the victims of the Great Famine - those who died, those who were forced to emigrate, and those who suffered and survived - we also recall that the people of Ukraine who now need our help, have their own history of hunger.

"Ireland has opened its doors to the people of Ukraine at their time of need and that crisis has brought home the importance of those who can help others, doing whatever they can to aid those in dire straits."

Taoiseach Micheál Martin leads the National Famine Commemoration ceremony at Strokestown Park, Co Roscommon. It will include military honours and a wreath-laying ceremony in remembrance of all those who suffered or perished during the Famine. https://t.co/2gCSI8ESDU

Minister of State for the Department of Defence Jack Chambers also attended Sunday's event and described the Famine as the "darkest period of our history".

"Today's ceremony is an opportunity to commemorate and honor the suffering and resilience of victims of the Famine years," Chambers said.