ICE, FBI have been using facial recognition technology to mine state's DMV databases

ICE and the FBI have been found to be mining state's DMV databases using facial recognition technology. 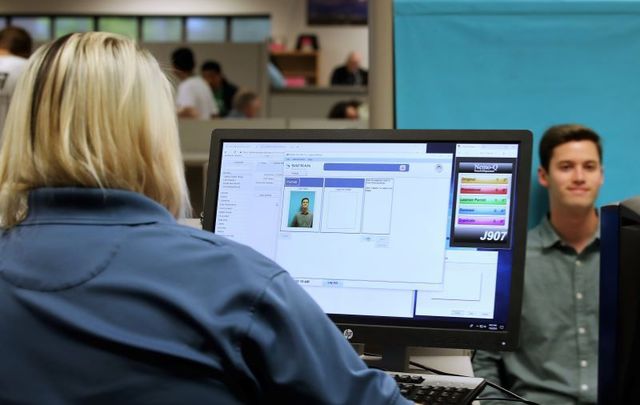 A man gets his picture taken at the DMV, whose databases ICE and FBI have been found to be mining. Getty Images

Immigration Control and Enforcement (ICE) has been found, along with the Federal Bureau of Investigation (FBI), to be mining state’s Department of Motor Vehicle’s (DMV) databases of drivers licenses using facial recognition technology.

In conjunction with research from George Law, The Washington Post has obtained years of documents which “reveal that federal investigators have turned state departments of motor vehicles databases into the bedrock of an unprecedented surveillance infrastructure.”

While The Washington Post acknowledges that law enforcement has long had access to “biometric” data on citizens - such as fingerprints and DNA - the use of facial recognition technology through the DMV’s database of driver’s licenses is relatively new.

The practice is also largely unregulated and was never consented to by neither those who hold driver’s licenses nor lawmakers. Maryland Representative Elijah Cummings said in a statement to The Washington Post: “Law enforcement’s access of state databases is often done in the shadows with no consent.”

Rep. Jordan added in a tweet, "This should concern every American:"

Now we learn about the government’s ability to use facial recognition tech and access drivers license databases in 21 states.

This should concern every American.https://t.co/r9Ca45S9fC

These federal searches of state DMV records are a massive breach of privacy and trust. Americans don't expect -- and certainly don't consent -- to be surveilled just because they get a license or ID card. This has to stop. https://t.co/q08OIrhp98

Read More: This July 4th it does not feel so good to be an American

The Washington Post further reports: “While some of the driver photo searches were made on the strength of federal subpoenas or court orders, many requests for searches involved nothing more than an email to a DMV official with the target’s “probe photo” attached. The official would then search the driver’s license database and provide details of any possible matches.”

Several states in the US allow undocumented citizens to obtain driver’s licenses.

Clare Garvie, a senior associate with Georgetown Law who led the research, said: “The state has told [undocumented immigrants], has encouraged them, to submit that information. To me, it’s an insane breach of trust to then turn around and allow ICE access to that.”

New York State, which The Washington Post says is currently "negotiating with the FBI over access" to it's DMV's database, recently announced that it will grant undocumented citizens driver's licenses.

“You create a driver’s license for undocumented people, you just have to make sure you do it in a way that the feds don’t come in the next day and access that database with the exact opposite intention,” Cuomo told WAMC, an Albany radio station.