The walrus washed ashore in Kerry last Sunday and was said to be in an exhausted state. 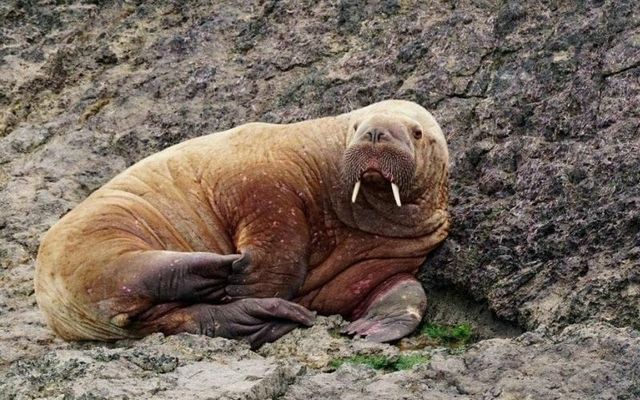 An Arctic walrus that washed ashore on Valentia Island off the coast of Kerry last weekend has been spotted in Wales.

The walrus was said to be in an exhausted state last weekend having drifted to Ireland on an iceberg that broke off the Greenland Shelf, but Welsh Marine Life Rescue said that the animal now appears to be in good health.

Both WMLR and Seal Rescue Ireland have confirmed that the walrus is the same animal that washed ashore on Valentia Island last Sunday, stating that the size and length of the walrus's tusks are consistent with those spotted in Kerry last week.

WMLR spotted the walrus in South Pembrokeshire at about 11 a.m. on Saturday and told RTÉ News that all of the animals' limbs appeared to be in working order.

The organization said that the walrus took a tumble while climbing off the rocks, causing panic as there was a "little bit of blood".

However, WMLR continued to monitor the walrus and said that the animal had sustained no visible injuries.

Seal Rescue Ireland has said that the walrus is undoubtedly tired after another long journey and urged people to avoid disturbing it if they come across it.

Seal Rescue Ireland additionally urged people to keep an eye out for the animal and said that people can help the animal by keeping their dogs on leashes and by staying at least 300m away and observing it from a distance.

The group said that the walrus is a sensitive species and claimed that sightings of the animal were extremely important for research and protection.

Anyone who spots the animal is urged to contact Seal Rescue Ireland at 0871955353.