Responding officer Eric Talley, a father of seven, has been confirmed among the dead following a mass shooting in a Boulder, Colorado supermarket on March 22. 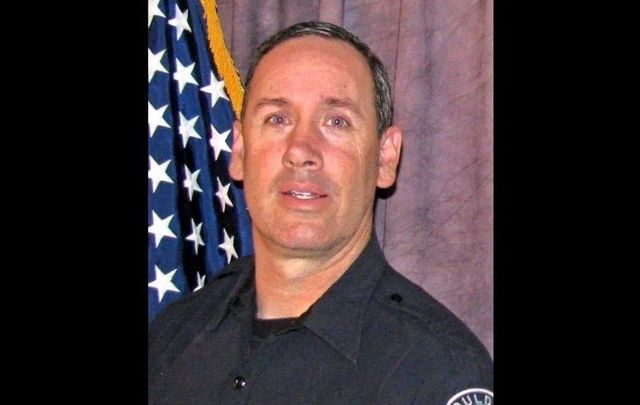 RIP: Officer Eric Talley, a father of seven, was the first to respond to the Boulder, Colorado mass shooting. Boulder Police

Eric Talley was the first cop at the scene of the mass shooting at King Soopers supermarket in Boulder, Colorado on March 22.

Hundreds of police including SWAT officers with ballistic shields responded to a mass shooting at a King Soopers supermarket in Boulder, Colorado. Ten people were killed including one cop, Officer Eric Talley. The victims will not be named until their families have been told.

Police Chief Maris Herold said We know of ten fatalities at the scene, including one of our Boulder PD officers ... Officer Tally responded to the scene - was first on the scene - and he was fatally shot."

This mass killing is the seventh in the United States since the start of 2021, according to a database compiled by The Associated Press, USA Today, and Northeastern University.  It closely follows the murder of eight people at three Atlanta, Georgia massage businesses. The crime has stunned Colorado, which has experienced several mass shootings, including the 1999 Columbine High School massacre and the 2012 Aurora movie theater shooting.

On Monday, March 22, shoppers and store workers were sent scrambling for safety as gunfire broke out at the Boulder supermarket. As cops and SWAT officers responded frightened customers and employees were escorted from the area. Others took refuge in nearby shops, the AP reports.

Several law enforcement agencies, including the state SWAT team, quickly arrived at the scene of a reported shooting at a grocery story in Boulder, CO.

Boulder Police Chief Maris Herold said on Monday night, one suspect is in custody. Boulder County District Attorney Michael Dougherty also said that the one suspect was injured and was receiving medical care.

A shirtless middle-aged white man, handcuffed, with blood running down his leg was removed from the store during the siege but at the time was not identified as the gunman.

Dougherty told the AP “This is a tragedy and a nightmare for Boulder County.

"These were people going about their day, doing their shopping. I promise the victims and the people of the state of Colorado that we will secure justice.”

Eric Talley had been with Boulder Police since 2010. Talley was the first to arrive at the scene following calls about shots fired and someone with a rifle having been spotted.

DA Dougherty said, "He was by all accounts one of the outstanding officers of the Boulder police department, and his life was cut too short."

In a statement, Talley's father, Homer, said “He was looking for a job to keep himself off of the front lines and was learning to be a drone operator

“He didn’t want to put his family through something like this.

“He had seven children. The youngest is seven years old. He loved his kids and his family more than anything.”

On Facebook Jeremey Herko, who described himself as one of Talley's best friends said "He was a devout Christian, he had to buy a 15-passenger van to haul all his kids around, and he was the nicest guy in the world."

As Talley's ambulance left the King Soopers crime scene dozens of police and emergency vehicles flashed their lights and saluted the officer.

Speaking about all the officers involved in the mass shooting Chief Herold said "Police officers' actions fell nothing short of being heroic." She added that a "very complex investigation" would take at least five days to complete.

Images from the procession that took #Boulder police Officer Eric Talley's body away from the scene (pics via @TimothyFHurst) pic.twitter.com/I6AqgL6MNv

Dougherty said it was too early to speculate about motives. He confirmed the investigation would involve local, state, and federal agencies.

Matthew Kirsch, the acting U.S. attorney for Colorado, pledged that “the full weight of federal law enforcement” will support the investigation. He said investigators from the Bureau of Alcohol, Tobacco, Firearms, and Explosives were at the crime scene, along with FBI agents.

Colorado Governor Jared Polis said "My heart is breaking as we watch this unspeakable event unfold in our Boulder community. He called the incident a  "senseless tragedy".

Boulder mayor Sam Weaver tweeted "Words can do no justice to the tragedy that has unfolded this afternoon."

Videos of the crime scene taken by witnesses have been posted to social media showing victims lying prone at the supermarket.

Speaking to the Denver Post, Sarah Moonshadow explained that she and her son had just brought some strawberries when they heard the gunfire. She said they ducked and "just ran". Outside, her son, Nicolas Edwards described how arriving police pulled up next to a body in the parking lot.

Ryan Borowski was in the store when he heard gunshots. He told CNN "I just nearly got killed for getting a soda and a bag of chips...

"It felt amazing that everybody was helping each other out and that our instincts were on the same page and we ran... I don't know why other people didn't, and I'm sorry that they froze. I wish that this just didn't happen."

Last month, Biden called on the US Congress to enact "common sense" gun law reforms.  He called on them to pass laws that would require background checks on all gun sales and ban assault weapons and high-capacity magazines.

He said, "This administration will not wait for the next mass shooting to heed that call."

Majority leader Chuck Schumer said the Senate "must and will move forward on legislation to help stop the epidemic of gun violence".