Dan and Barbara Donovan used an Irish shillelagh which dates back to the 1800s to beat off three intruders at their home in Illinois. 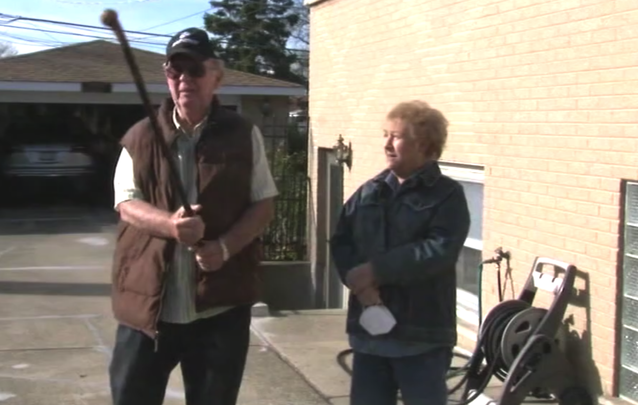 An elderly couple in Illinois heroically prevented a home burglary by using a treasured Irish walking stick to fight off their intruders.

Dan Donovan, 81, and his wife Barbara, from Niles, Illinois, were sitting down to dinner two weeks ago when a man posing as a utility worker arrived at their door on the pretense of checking their fuse box.

The elderly couple had received from their electric company a day earlier informing them that crews would be working in the area, so they bade the man enter, and 81-year-old Dan accompanied him to the fusebox.

While the two men were downstairs, however, Barbara Donovan heard noises upstairs and found two other intruders coming at her with a pillowcase.

She cried out and her husband - a former marine - grabbed the closest weapon he could find to fight off the three intruders.

The weapon turned out to be an old Irish shillelagh, a family heirloom that once belonged to his grandfather and dates back to the 1800s.

Dan Donovan forced the three men out of the house, hitting one of them over the head with the shillelagh, and he proceeded to give chase barefoot on the street.

He told ABC7 that he then chased the three men into their car while wielding the Irish walking stick.

"They were backing up at high speed and I hit the windshield, and I hit the hood on the way out, and I chased them down the street."

The 81-year-old former marine might have prevented the burglary, but he modestly gave the credit to his wife.

"If it wasn't for her, I would have been helping the guy in the car and waving goodbye to him."