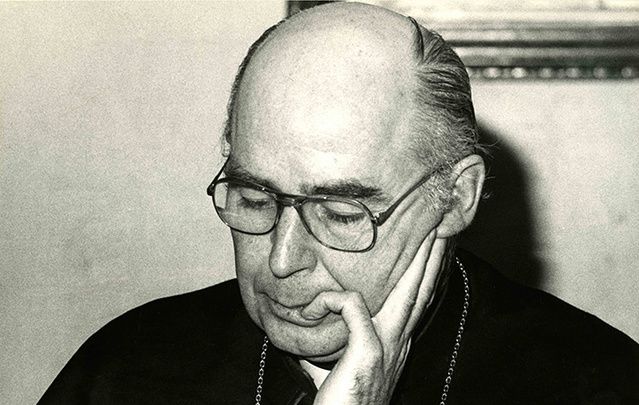 Edward Daly, the Catholic priest photographed waving a bloodstained handkerchief as he attempted to bring one of those injured during Bloody Sunday to safety, died early Monday aged 82.

The Irish priest went on to become bishop of Derry and a prominent peace campaigner after he was sprung into the limelight in one of the most iconic images of the Northern Ireland Troubles.

Often referred to as the Bogside Massacre, Bloody Sunday took place on January 30, 1972, when British paratroopers opened fire on a peaceful protest organized by the Northern Ireland Civil Rights Association, which was protesting the poor treatment of Catholics in Northern Ireland, killing 14 people.

The then Fr. Daly had attended many several civil rights marches in the build-up to Bloody Sunday and was present when British soldiers began to fire on the unarmed citizens. Images of the 39-year-old Daly trying to bring the mortally wounded Jackie Duddy to safety were broadcast all over the world.

The priest’s later testimony that the British soldiers fired on the crowd with no provocation were rejected by the British government in 1972, but Daly continued to tell his story, eventually being proven accurate in 2010 following a $265 million, 12-year investigation.

The Saville Inquiry found that there was no justification for firing at the protesters. British Prime Minister David Cameron formally apologized to the families of those killed or injured. It has since been confirmed that the families will also receive compensation.

"Bishop Edward will be remembered as a fearless peace-builder," said Archbishop of Ireland Eamon Martin.

"His untiring advocacy ... earned him respect from some, suspicion from others.

“Bishop Daly served, without any concern for himself, throughout the traumatic years of the Troubles, finding his ministry shaped by the experience of witnessing the violence and its effects.”

‘Bloody Sunday changed my life in every way’ said Dr Daly, whose stroke liberated him https://t.co/B37OG7IVnE

Born in Ballyshannon, Co. Donegal in 1933, Bishop Daly was raised in Belleek, Co. Fermanagh, one of the six counties of Northern Ireland. Daly attended the famed St Columb's School in Derry, the second largest city in Northern Ireland.

He studied for the priesthood at the Irish College in Rome and was ordained in 1957. His first assignment was as a curate in Castlederg and from there he was moved to the parish of St. Eugene’s Cathedral in Derry.  Daly’s parish included the Bogside, the large Catholic neighborhood in Derry that became a center of events during 'the Troubles.' Daly experienced these first hand and became a well-known peace campaigner in the area. He was made a bishop in 1976.

Bishop Daly also campaigned for others affected by the Troubles outside of his own parish, including the Birmingham Six – six Irish men wrongfully convicted for the bombing of two pubs in Birmingham, England, who spent 16 years in jail before finally being acquitted of the crime in 1991.

He was critical of all violence during the Troubles regardless of whether the perpetrators were Republican, Loyalist or forces of the state, as was noted yesterday by Northern Ireland Deputy First Minister Martin McGuinness, who has admitted to being a member of the IRA around the time of Bloody Sunday.

“Hard being a Bishop at time of war, pleased he lived to see peace,” added McGuinness.

Deeply saddened at death of much loved former Bishop of Derry Edward Daly.Hard being Bishop at a time of war, pleased he lived to see Peace.

Aside from his influence as a peace campaigner, Bishop Daly also questioned the Catholic Church’s stance on clerical celibacy, claiming that there was room for married priests in the Church.

He was the author of two memoirs, “Mister, Are You a Priest?” (2000) and “A Troubled See: Memoirs of a Derry Bishop” (2011), the second of which voiced his opinions that priests should be free to marry if they so wished.

Bishop Daly died in a Derry hospital in the early hours of Monday morning. He suffered a stroke in 1994 which forced him into retirement, but he continued in the role of chaplain to Derry's Foyle Hospice until February of this year.