“I still think it’s like a dream!” Staff and shoppers at Kilkenny Design in Dublin were surprised and delighted when Bill Clinton dropped in today for a bit of shopping. 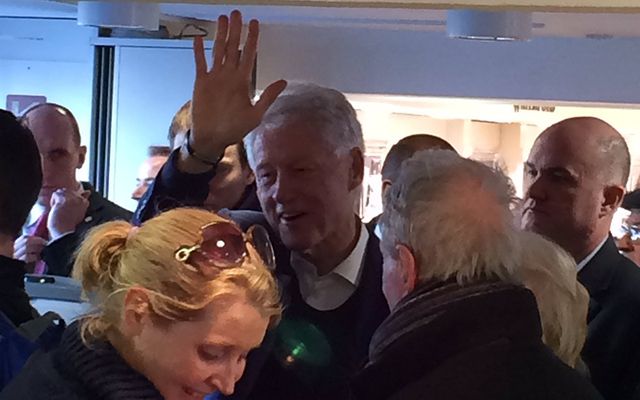 Bill Clinton surprised staff and shoppers at a Dublin store earlier today when he popped in unannounced to do a bit of shopping.

The former president, who is spending some time in Dublin after traveling to Derry for the funeral of Martin McGuinness, spent nearly an hour in Kilkenny Design on Dublin’s Nassau Street, much to the delight of everyone in the shop.

An absolute gentleman who had time for everyone today, and received a great reception. #BillClinton @kilkennydesign pic.twitter.com/W4fKZs7F4k

"We didn't expect him to call in, it was a complete surprise," manager Anastacia Dovdula told the Irish Independent.

"He had an entourage with him. Everyone is still buzzing now.

"To be honest, I can't even think, I still think it's like a dream.”

She said that the former president arrived around 12:40 pm and departed shortly after 1:20 pm, spending a good 40 minutes browsing the shop’s selection of Irish-made products.

What a surprise we got today when Bill Clinton visited our Nassau Street store! Bill is a fan of #irishdesign keep an eye out in #dublin pic.twitter.com/fzNcCqgZOU

"He did buy a few things, all of the things were made in Ireland by Irish designers which is great because that's what we're all about,” she said. “He bought some jewellery, some homeware and crafts.” Gifts for HRC, perhaps?

As a gesture, the shop gifted him with a hand-made Irish toy for his grandchildren, Charlotte and Aidan.

People in the shop and nearby were starstruck, sharing photos of the former president on social media.

When a causal lunchtime stroll with @CrankyFrankie15 leads to seeing @billclinton in @KilkennyShop ! #random pic.twitter.com/xwkhSSNDmb