Dublin Bus suspended services to parts of West Tallaght from Thursday night after drivers reported 35 incidents of attacks, vandalism, and threats with knives in December. 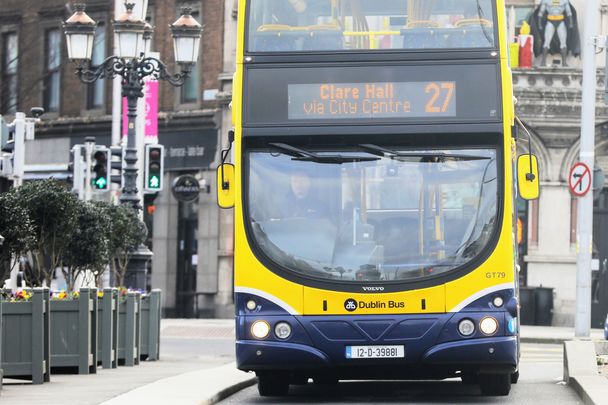 A Dublin Bus on O'Connell Street in January 2022. RollingNews.ie

Dublin Bus suspended services to parts of West Tallaght from Thursday night after drivers reported 35 incidents of attacks, vandalism, and threats with knives in December.

Dublin Bus said in a statement on Thursday: "Following discussions between Dublin Bus, Trade Unions, and other stakeholders including An Garda Síochána, it has been agreed that rather than terminating at The Square Tallaght, Routes 27, 65b, and 77a will now follow the agreed anti-social behaviour protocol."

Dublin Bus advised customers to check back on its website or social media channels for updates.

According to the Irish Times, trade unions representing bus drivers informed Dublin Bus that services to West Tallaght would be halted from 6 pm on Thursday, January 12 because it was not tenable for drivers to "risk life and limb, driving buses into estates in west Tallaght, to be attacked and assaulted."

The National Bus and Rail Union (NBRU) and SIPTU sent a letter to Dublin Bus' human resources division on Wednesday, January 12 announcing that the 27, 65b, and 77a bus routes would terminate at the Square shopping center from 6 pm on Thursday and every day thereafter.

However, union representatives later held talks with Dublin Bus and announced that services would terminate on the N81 road a short distance past the Square.

Union representatives said services would not enter the Killinarden and Jobstown housing estates until they saw an improvement in anti-social behavior.

"Thankfully there have been no serious injuries," John Murphy, SIPTU's transport sector organizer, told the Irish Times, "but there have been several near misses. Drivers don’t want to be going into areas where they and passengers are being intimidated."

Murphy also said Dublin Bus had given reassurances that extra Garda resources would be provided in the area at certain times.

"Hopefully the extra resources will work but there will have to be a wider conversation about safety on public transport."

Meanwhile, the letter to Dublin Bus stated that Jobstown and Killinarden had become known "hot spots" for anti-social behavior.

"Unfortunately, at a time when the levels of thuggery, violence and vandalism in these hot spots is once again reaching epidemic proportions, and in west Tallaght in particular, the levels of participation from public representatives and other stakeholders has dwindled to nothingness," the letter said.