Video of a Dublin Bus mounting a footpath between Rathfarnham and Terenure has "terrified" one concerned resident and prompted an investigation. 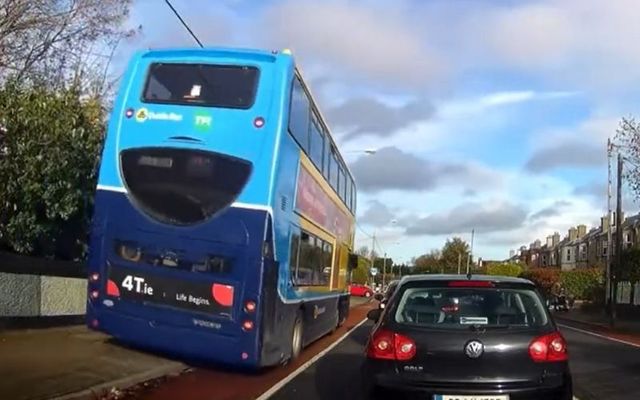 Kevin Gorman shared footage of the Dublin Bus mounting a footpath in a Dublin suburb on November 8. Kevin Gorman, Twitter

Dublin Bus has reportedly launched an investigation after a bus was filmed mounting the footpath in a Dublin suburb to avoid traffic.

The incident took place on a stretch of road between Rathfarnham and Terenure Village in South Dublin at around 11 am on Tuesday, November 8.

Kevin Gorman shared a video of the incident that he filmed while he was stuck in traffic. Gorman's video has since been viewed more than 161k times, and has drawn lots of reaction.

The video shows the bus mounting the footpath along a stretch of Rathfarnham Road where there is no bus lane and subsequently driving along the path in front of houses that open out onto the road.

The bus rejoined the road after a short period, avoiding a car that was emerging from a nearby estate at the time.

So there I was, sitting in traffic that was stopped between Rathfarnham and Terenure when a Dublin Bus went past me on the inside, in the pavement and bicycle Lane. 11am today. @dublinbusnews @TFIupdates @Dept_Transport @IrishTimes @IrishSunOnline @irishdailymail pic.twitter.com/pfwdpXLC1s

The bus mounted the path outside in front of the home of Joyce Porto, who told RTÉ News that the footage "terrified" her.

"I have two small kids," Porto said, "they are five and seven and normally when we leave the house early in the morning, they run (to the path in front of the house)."

A spokesperson for Dublin Bus said that the incident was "under investigation and will be investigated fully," while a statement from An Garda Síochána said that "it commenced inquiries into an alleged incident of dangerous driving."

The incident was discussed during Dublin City Council's traffic and transport committee on Wednesday during a discussion on the Road Safety Authority's "Be Safe, Be Seen" campaign.

The campaign is described by Fianna Fáil councilor Damian O'Farrell as "a common sense community effort to keep everyone safe and is mindful of the different categories, ages, and abilities of all road users."

Speaking during the meeting, Green Party councilor Carolyn Moore said that while she supports the campaign, she is wary of placing the "onus" of road safety on pedestrians.

"I couldn’t endorse a campaign that puts the onus on toddlers, children to protect themselves from dangerous driving, instead of actually starting by identifying what the problem is and working on a solution that tackles that," Moore said during the meeting.

"If you take that bus in Terenure yesterday, any pedestrian who stepped out of their front gate into the path of that bus could have been lit up like a carnival and they still would have been injured in that scenario."