Dublin Airport is preparing for the summer season after last weekend's delays debacle that saw lengthy queues and staffing shortages result in some 1,000 passengers missing their flights. 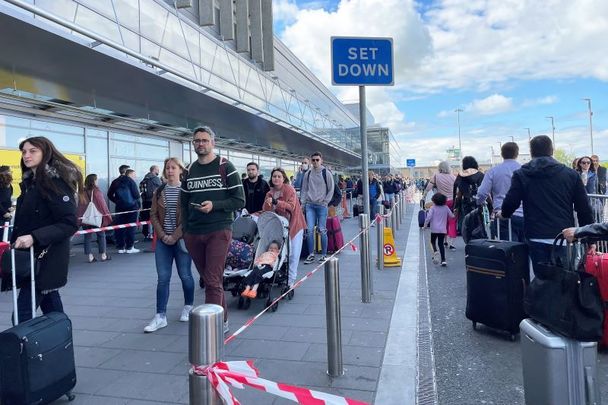 May 29, 2022: Queues at 3 pm at Dublin Airport. Travelers had been queueing at Dublin Airport from early morning. The DAA issued a warning that some passengers were likely to miss their flights and advised rebooking. RollingNews.ie

Dublin Airport has outlined plans to manage the passenger experience this June Bank Holiday weekend and into the busy summer period after an estimated 1,000 passengers missed their flights over the weekend due to lengthy queues and staffing shortages.

DAA, the semi-state parent company of Dublin Airport, said on Tuesday that it has outlined plans to “improve queue management” and “to maximize the availability of staffing resources and increase the number of security lanes open at peak times.”

DAA has also updated the Government Ministers on how Dublin Airport intends to compensate passengers who missed flights last weekend. The DAA has received more than 300 refund applications since Sunday but expects that figure to increase.

The plans come after engagements between DAA CEO Dalton Philips and his team with Minister for Transport Eamon Ryan and Minister of State with responsibility for international transport Hildegarde Naughton and their officials.

During a meeting with Dalton and his team on Monday, Ministers Ryan and Naughton expressed their "immense disappointment and frustration" at the unacceptable scenes at Dublin Airport over the weekend.

On social media, photos and videos showed winding queues outside the airport. Dublin Airport notified passengers that they may need to rebook flights and apologized.

The Ministers said on Monday that the excessively long queues and wait times were causing "significant distress to passengers" as well as "reputational damage to the country" from a business, travel, connectivity, and tourism point of view.

The Ministers stated that the unacceptable queues should not be repeated this Thursday and Friday and into the Bank Holiday weekend and that passengers should be confident that they would make their flight with minimum inconvenience.

Daily meetings will be held at the Ministerial level with the DAA until the difficulties persisting at the airport are satisfactorily resolved, the Ministers' joint statement said.  Dalton is set to appear before the Oireachtas Travel Committee tomorrow, June 1.