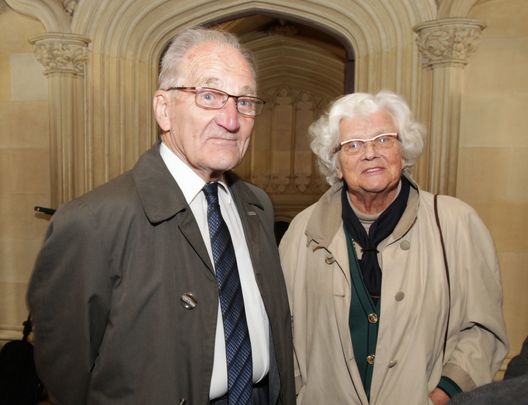 Industrialist Herrema, held for 36 days in 1975 by captors Eddie Gallagher and Marion Coyle, died on Friday aged 99 after a long illness in his native Netherlands.

His death was the day after the burial of his wife of 72 years who was 94 when she passed.

Tributes to Herrema, who ran the Ferenka factory which employed 1,400 in Limerick in the 1970s, were led by President Michael D. Higgins.

He said, “Dr. Herrema harbored no bitterness towards his abductors and maintained a very strong bond with Ireland. Both he and Elisabeth accepted honorary Irish citizenship.

“They will be missed, and fondly remembered by their many friends in Ireland. Sabina and I send our deepest condolences to their four sons, wider family and friends.”

Justice Minister Charlie Flanagan said, “I believe we all have much to learn from the ordeal that Tiede Herrema endured and the great magnanimity and courage he and Elisabeth always embodied. Their passing, just a short time apart, is a loss to both The Netherlands and Ireland.”

A long-time friend Joe Brennan, who was the first secretary in the Irish Embassy in the Netherlands at the time of the kidnapping, described Herrema as a “man of great principle, rigor, and kindness. He was a man of the deepest courage and integrity.”

The kidnappers held him at a house near Monasterevin, Co. Kildare, and at first demanded the release of three IRA prisoners, including Gallagher’s girlfriend Rose Dugdale who had abandoned her society background to be a paramilitary. Later they changed their demand to a £2 million ransom and a flight to the Middle East.

During the siege, Elisabeth Herrema gave a TV interview in which she said she the ransom should not be paid and that trusted the Irish security agencies to be successful.

Five years ago, Herrema recalled his ordeal in an interview in The Irish Times. He said the worst part of the experience was no knowledge of where he was or even why he was being held.

He said, “I had no sense of what they were fighting about. What did they want? They were nervous, as I was. As long as you don’t know where you are, and what they are going to do, you are frightened.”

As a Dutch resistance fighter during the Second World War, Herrema was arrested by the Nazis and sent to a concentration camp in Poland. After the prisoners were liberated by the Russians, Herrema walked 500 kilometers to the safety of the American lines.

After his 1975 kidnapping, he and Elisabeth returned to The Netherlands, but they maintained close links with Ireland, including an apartment in Dublin,

They were made honorary Irish citizens and Herrema was also made a freeman of Limerick city. He donated his papers to the University of Limerick.