Dozens of deer killed by snipers in Phoenix Park

A culling of deer in the Dublin Park has caused outrage among human rights activists who have accused the government of farming deer to make money. 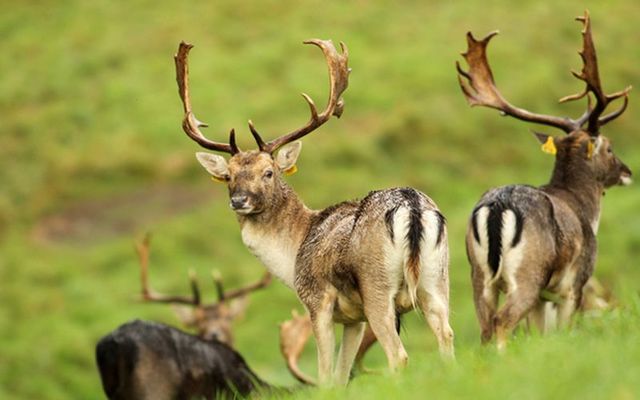 Fallow Deer in the Phoenix Park in Dublin on this autumn day. Sam Boal/Rollingnews.ie

A culling ordered by the Office of Public Works resulted in the deaths of 34 deer in Dublin’s Phoenix Park.

The Irish government has been accused of farming deer for money by animal rights activists shocked at the culling of the animals in Dublin’s Phoenix Park on Wednesday.

The slaughter, ordered by the Office of Public Works, saw 34 tame deer shot down, causing outrage among activists who claim that the deer population in the park can be kept low in a better way. The deer in Phoenix Park are a well-known attraction and they generally have little fear of humans as they are used the large crowds of visitors at the popular tourist attraction.

The OPW has said that the culling is needed for "sustainable management" in order to prevent the rise of the fallow deer population. A rise in the deer population, the say, could lead to an increase in road accidents and the "potential role of deer in the epidemiology of specific diseases." It is believed that the animal’s bodies are now to be sold as meat.

Pics of deer carcasses in Phoenix Park after cull as one is dragged by antlers https://t.co/9rssucGqGn

The Alliance for Animal Rights (AFAR) have accused the Government, however, of farming the park’s deer to make money.

“A humane alternative of contraception works on deer but is not used by the OPW as the killing alternative is more lucrative for their coffers,” a spokesperson from the AFAR told the Irish Mirror.

“Shooters are devoid of any empathy for innocent, undefended animals.

“No animal is safe if money is to be made.

“Shooting deer in view of other deer is barbaric, all animals experience fear at seeing their friends killed.”

They have now called on the Irish government to produce an alternative humane way to address the issue of the deer population in the park.

"No animal is safe from human greed, an alternative exists here. With the growing opposition to violence towards animals, this policy of profit before respect must be stopped,” AFAR added.

"AFAR are launching a campaign to stop this sad and unnecessary murder of innocents."

Phoenix Park is the biggest metropolitan park in Europe and was originally formed as a royal hunting park in the 1660s, opening to the public in 1747. The park is also the home to Dublin Zoo and the residence of the Irish President.

Read more: This Irish park has been named the best in the world