Disgraced Cardinal to be arraigned on three sexual abuse charges

Defrocked US Catholic Cardinal Theodore McCarrick is set to be arraigned on three charges that he molested a 16-year-old boy in 1974, becoming the first Cardinal to face criminal charges of sexual abuse. 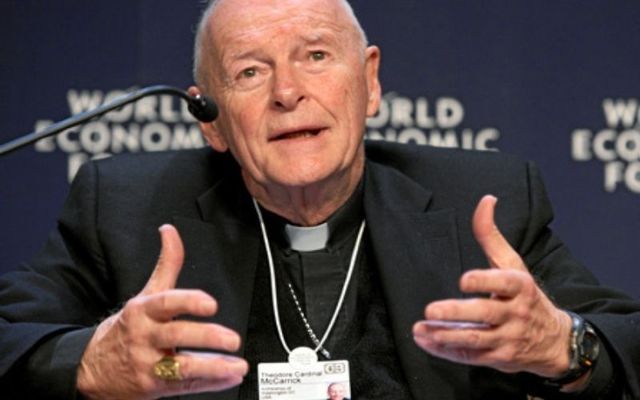 Defrocked US Catholic Cardinal Theodore McCarrick is set to be arraigned on three charges that he molested a 16-year-old boy in 1974, becoming the first Cardinal to face criminal charges of sexual abuse.

McCarrick, 91, a former archbishop of Washington DC, is expected to appear in a Massachusetts courtroom on Friday after he was charged with three counts of indecent assault and battery on a person 14 years or older in July.

His accuser, who is now in his early 60s, plans to attend the Dedham District Court, while advocates for clergy abuse survivors plan to gather outside the courtroom.

It will be McCarrick's first public appearance in three years and the first time that he has publicly faced one of more than a dozen people that have accused him of sexual abuse or harassment.

McCarrick is expected to enter a not-guilty plea and has previously said that he has no recollection of committing sexual abuse.

Each of the three charges carries a minimum term of five years in prison and requires McCarrick to be registered as a sex offender.

Prosecutors say that McCarrick abused the 16-year-old boy in a coat room at the victim's brother's wedding on June 8, 1974, in Wellesley College, Massachusetts.

The former Cardinal faces several civil lawsuits from other men who have accused him of committing sexual abuse decades ago, but the statute of limitations in those cases has expired, preventing McCarrick from facing criminal charges.

However, Massachusetts prosecutors moved forward with the case at Wellesley College, citing an infrequently used law that freezes the statute of limitations if the accused doesn't live in a certain jurisdiction.

Prosecutors subsequently argued that the statute of limitations does not apply to McCarrick because he didn't live in Massachusetts for a significant period of time.

A well-connected figure in the Catholic Church, McCarrick had served as a Vatican diplomat despite dozens of allegations of sexual abuse following him for decades.

He was expelled from the priesthood in 2019 after a Vatican investigation committee found him guilty of numerous crimes against minors and adults. A lengthy Vatican report released a year later revealed that McCarrick had risen through the ranks in the Catholic Church despite persistent allegations of sexual abuse.

McCarrick was initially suspended by the archdiocese of New York and the Vatican in 2018 due to a credible allegation of sexual abuse from decades previously. The ruling was followed by multiple allegations from people who said that McCarrick groped, fondled, and harassed them as children or when they worked for him as priests and seminarians.

McCarrick, who currently lives in a suburban Missouri treatment center, has not appeared in public since 2018. In 2019, he told a Slate reporter that he is the target of ideological enemies and said that he goes to confession every week.

"I do not believe that I did the things that they accused me of," he told Slate in 2019.

The charges against former Springfield Bishop Thomas Dupre, the only other Bishop to face criminal charges over sexual assault, were dropped on the same day that they were brought against him in 2004 due to the statute of limitations.