Did the Virgin Mary appear at Knock this weekend?

Crowds gathered in Knock on Saturday after a 14-year-old boy claimed that he had a premonition the Virgin Mary would appear at the Catholic shrine. 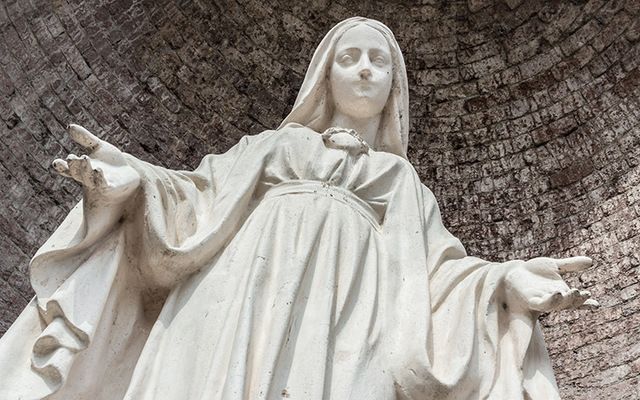 A statue of the Virgin Mary. iStock

A video in which it is claimed the Virgin Mary appeared over Ireland this weekend is going viral with almost 700, 000 views in just two days. Crowds had gathered in Knock on Saturday after a 14-year-old Irish lad claimed that the Mother of Christ was to reappear in the town where she is already claimed to have appeared some 138 years ago.

Crowds can be heard exclaiming and thanking God and the Virgin Mary as the sun emerges dazzling from behind the clouds amidst claims that the sun was so bright because it was being caused by a higher power.

Men in the crowd can be heard claiming that the sun is spinning, barely audible over the furore and repetition of the “Hail Mary” from the people gathered.

Devoted worshipers, including many from the travelling community, who are a devoted Catholic ethnicity, gathered at the Knock Shrine on June 10 after a traveller teenager claimed he had visions of the Virgin Mary while at the Fatima Shrine with his family last May. During the visions, the boy was told to expect a reappearance from the Virgin Mary in Knock where she would bless everybody present.

His experience traveled widely through the community via social media, leading to a massive crowd gathering last weekend.

"For two days our son seen Our Lady in Fatima and he seen the visionaries," the boy’s father explained online.

“The visionary from Medjugorje was speaking to him in Portuguese and [boy's name] was able to understand every word out of her mouth, he got that gift to understand any visionary.

"On the 10th of June we will be going to Knock and whoever wants to come is welcome. Our Lady will appear to [son's name] there."

"What it is, is that Our lady will appear on the ground there to," he said "and she will bless everyone on the ground.

"He won’t be doing it individually – whoever wants to be there at three o’clock Our lady will come down, I can’t say if the three visionaries will be there, but I know Our Lady will be there.

"It’s out there for everybody out there who believes in it and who doesn’t believe in it, but what I am telling here is the truth.

“If you want to be there on 10 June everyone is welcome."

While initial media reports claimed that there was no evidence of a vision at Knock that afternoon, a video was since posted on Facebook by Biddy Connors in which the crowd appear to believe the heightened sunlight to be a sign from the Virgin Mary.

On August 21, 1879, 15 of the town’s people claimed to have witnessed the apparition of the Blessed Virgin Mary, Saint Joseph, John the Evangelist, angels, and Jesus Christ on the church wall.

Two Commissions of Enquiry - one in 1879 and one in 1936 - accepted the testimonies of the 15 as trustworthy, despite claims the apparition was nothing more than a cruel trick played of the townspeople by a Protestant policemen using a light box, which were common at the time.

Despite the cynics, pilgrimages to Knock began as early as 1880 and remarkable miracles were reported by the sick and injured who visited the church. The tradition continues even as Ireland becomes a more secular state and Knock maintains its position as a stronghold of the Catholic religion in Ireland.

The Virgin Mary is also claimed to have appeared twice in Co. Limerick in recent years, the first in 2009 and the last just last December.

An apparition of the Virgin Mary or a trick of the light? Let us know your thoughts in the comments section.