John Curry, the youngest witness to the 1879 apparition at Knock remembered by Cardinal Timothy Dolan. 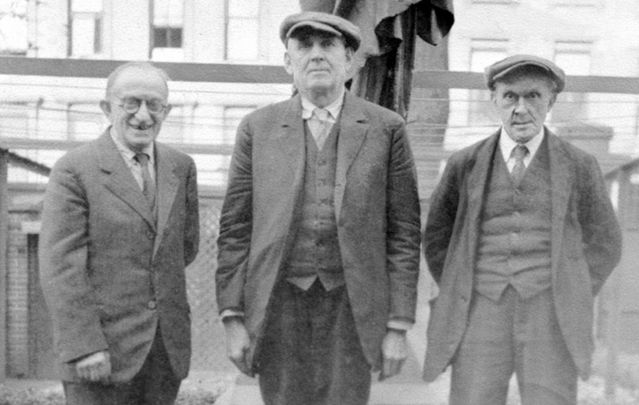 John Curry, center, one of the Knock visionaries, in New York, where he will be reinterred. KnockShrine.ie

In 1879, John Curry witnessed an apparition of the Blessed Virgin, St. Joseph and St. John the Evangelist in Knock, County Mayo. Later in life Curry moved to New York, fell on hard times and was buried in a communal grave.

The Archbishop, who visited Knock to officially open the annual novena, said, “We are thinking about moving the grave to St Patrick's – wouldn't that be beautiful?” – and so, on Saturday, May 13, he is inviting all interested to attend a special Requiem Mass for John Curry, followed by his reinterment at Saint Patrick’s Old Cathedral Cemetery (Mott and Prince Streets in Manhattan).

The Very Reverend Richard Gibbons, Rector of the Shrine of Knock in Ireland, will join the cardinal along with pilgrims from Ireland.

Curry was just five-years-old when he and 14 others said they saw Our Lady in the County Mayo village. Curry gave his testimony about what he witnessed on the wet August night in 1879 to a church investigation that was carried out in 1937. By then, economic circumstance in Ireland had forced Curry to immigrate to the United States.

Read More: Virgin Mary made famous apparition at Knock on this day in 1879

"He was a little worried. He said it was obvious that the grave was old and that people had not been visiting it. I said we should move him to St Patrick's," explained Dolan.

The story of August 21, 1879, is one that’s been told often. Mary McLoughlin, the housekeeper to the parish priest of Knock, was astonished to see the outside south wall of the church bathed in a mysterious light; there were three figures standing in front of the wall, which she mistook for replacements of the stone figures destroyed in a storm.

She rushed through the rain to her friend Margaret Byrne's house. After half an hour, McLoughlin decided to leave, and Byrne's sister agreed to walk home with her.

As they passed the church they saw an amazing vision very clearly: standing out from the gable and to the west of it appeared the Virgin Mary, St. Joseph and St. John. The figure of Mary was life-sized, while the others seemed to be neither as large nor as tall.

Read More: Some believe the story of the apparition at Knock is a fake

Among the witnesses were Patrick Hill and John Curry. As Hill later described the scene: “The figures were fully rounded, as if they had a body and life. They did not speak but, as we drew near, they retreated a little towards the wall.” Patrick reported that he got close enough to make out the words in the book held by the figure of St. John.

The next day, a group of villagers went to see the priest, who accepted their report as genuine. He wrote to the diocesan Bishop of Tuam, then the Church set up a commission to interview a number of the people claiming to have witnessed the apparition.

The diocesan hierarchy was not convinced, and some members of the commission ridiculed the visionaries, alleging they were victims of a hoax perpetrated by the local Protestant constable. But the ordinary people were not so skeptical, and the first pilgrimages to Knock began in 1880. Two years later Archbishop John Joseph Lynch of Toronto made a visit to the parish and claimed he had been healed by the Virgin of Knock.

Last year, at the annual novena, up to 150,000 visitors attended over nine days. Cardinal Dolan arrived at Knock with 165 American pilgrimages for a week-long visit.

The Archbishop said, “I told our people from the beginning, 'We're not tourists – this is a pilgrimage.'"

The American pilgrims had Mass in Lough Derg, where they spent half a day rather than the traditional three days.

"The day was so raw and cold that our people got a good hint of the mortification and the self-denial associated with Lough Derg," said Dolan. They then went on to the Dingle Peninsula, where they had a “glorious” day. The group also visited Listowel and Killarney Cathedral.

However, the John Curry issue was paramount in Cardinal Dolan’s mind after the trip and this upcoming requiem mass and reinternment is the result.