The Devil is in the detail for this new luxury Irish whiskey. 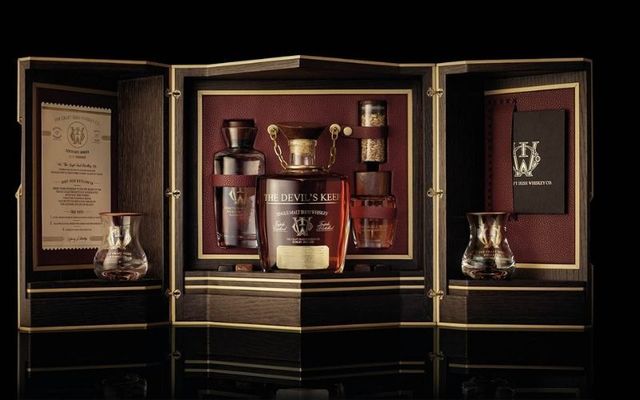 Devil's Keep was launched on Monday at €10,000 a bottle. Craft Irish Whiskey

Craft Irish Whiskey, who want to restore Ireland's place at the top of the luxury whiskey market, launched "The Devil's Keep", a triple-distilled, 29-year-old single-malt whiskey.

The special-edition whiskey is the oldest-ever triple-distilled whiskey and Craft Irish Whiskey expects the launch to help propel Irish whiskey to the top of the world whiskey market.

Only 333 bottles of the special-edition whiskey have been made available in the inaugural release, meaning that demand is likely to be sky-high.

The 29-year-old whiskey started its journey in American oak casks previously used to store bourbon before it was transferred to French oak barrels that were used to store Tawny Port.

The whiskey is finally transferred to virgin Hungarian oak barrels for a final finish and the three different stages of maturation gives it a smokey profile with hints of vanilla, caramel, and toasted sugar.

Each Devil's Keep bottle is sold in custom-made cases with a bespoke Japanese-style lock.

Inside the cases, there is a carafe of pure Irish spring water and an "Angel's Share" atomizer that leaves a scent of aged oak and creamy vanilla hanging in the air in addition to the Tiago Russo-designed bottle of Devil's Keep.

There is also a jar of malted barley sourced from the malting house and two custom-designed whiskey glasses inside each case, along with three obsidian whiskey stones.

Craft Irish Whiskey founder Jay Bradley said in a statement that Devil's Keep would help Irish whiskey to gain a foothold in the luxury whiskey market.

"For many years Scotland has dominated whiskey through the sheer breadth and depth of its offering. They’ve offered everything from lower-shelf, mass-produced blends to mid-shelf, higher-quality household names, as well as top-shelf brands. Yet, there has always been a gap in the market for ultra-luxury whiskeys," he said.

"Born from a conversation with my late father, The Craft Irish Whiskey Co. has a single mission: to create the finest whiskeys Ireland has ever made and to redefine global perceptions of luxury, while building a legacy."