Hamish O'Flaherty told mourners to "use the time you have wisely" at the funeral for his father James O'Flaherty, who was killed in the explosion in Creeslough, Co Donegal. 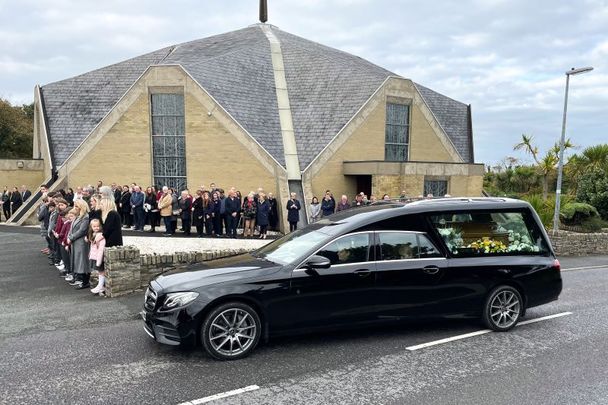 October 12, 2022: Mourners and members of the emergency services waiting outside St. Mary’s Church in Derrybeg as the hearse arrives carrying the coffin for the funeral of Creeslough victim James O'Flaherty. RollingNews.ie

Hamish O'Flaherty, the 12-year-old son of Creeslough victim James O'Flaherty, advised people to cherish their families "because they won't be there forever" during a poignant speech at his father's funeral on Wednesday.

Hamish O'Flaherty, who was in his father's car at the time of the tragic explosion last Friday, urged mourners to remember how valuable life is during a speech at the end of his father's funeral service.

He remembered his father as a "great man" who "worked very hard each day", fondly remembering that he wore the same jacket with a large paint stain everywhere he went.

"I would like to say thank you to all of the people who have given and offered so many things," Hamish said.

"The emergency services too, who were there within 15 minutes and also came to the wake.

"I would also like to say something I have learned in the past week or so. We should be grateful. For your families, cherish them, be grateful for they won't be there forever. Use the time you have wisely.

"Also, be grateful for your life because that too will not last forever. Be grateful, for you will be able to rest after your hard work."

"For your families, cherish them, because they won't be there forever."

Hamish O'Flaherty, 12, spoke at the funeral of his father, James, who died as a result of the explosion in Creeslough last week.

Shared via Kieran Roarty Funeral Director (with permission of the family) pic.twitter.com/01fcQyH5SW

Earlier, the congregation heard how 48-year-old James O'Flaherty was a "truly fantastic and loving" father and husband to Hamish and his wife Tracey.

James O'Flaherty, who was born in Sydney, led a happy and settled life with his wife and son and the family's pets, Spencer the cat and Murphy the dog, Fr. Brian O Fearraigh told the congregation.

Fr. O Fearraigh told mourners that O'Flaherty read to his son every night and "showered" his son and wife with kisses and hugs every day.

James O'Flaherty was the third of the ten Creeslough victims to be laid to rest.

Catherine O'Donnell, 39, and her 13-year-old son James Monaghan were the first victims of the tragedy to be laid to rest on Tuesday, while 14-year-old Leona Harper and 49-year-old Martina Martin were both laid to rest on Thursday.

Martin, a mother of four who was working at the Applegreen service station at the time of the explosion on October 7, was remembered as a natural, beautiful, and lovely person by Fr. John Joe Duffy at her funeral service in St. Michael's Church on Thursday.

Fr. Duffy told Martin's children Sean, Neil, Oisin, and Grainne that she loved each of them dearly, describing her as the "ultimate mommy bear".

Leona Harper was laid to rest following a service in Ramelton, near Letterkenny.

"As with most 14-year-olds, there were four important anchors in her life: her family, her friends, her hobbies and her school," Fr. Carney said.

Harper received a guard of honor from students at the local national school she attended, her teammates from Letterkenny Rugby Club, and schoolmates from her secondary school Mulroy College as her cortege arrived at the church.

The 14-year-old, who had a great love of agriculture, was staying with her friend on a sleepover and had gone to the Applegreen service station to buy ice cream at the time of the explosion.