Couple separated by Northern Irish border due to Brexit 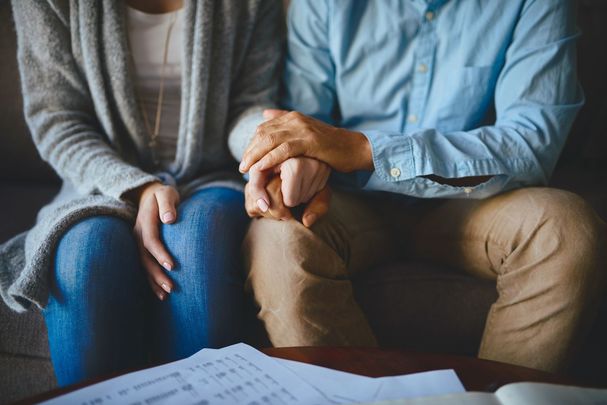 A couple forced to live apart on either side of the Northern Irish border for five months due to post-Brexit immigration rules have revealed that they are living in a "constant state of anxiety".

Corinne - an A&E doctor who worked on the frontline of the COVID-19 pandemic - gave up her job in Ireland eight months ago because she felt she could not extend her contract due to her imminent emigration to the UK.

She now "lives out of a suitcase" and faces a return to South Africa as her residency rights in Ireland come to an end. She also faces the threat of deportation if she tempts to illegally cross the Northern Irish border.

Brett and Corinne Giles moved to the Republic of Ireland in 2019 after spending 15 years in South Africa and began exploring a move to the UK eight months ago so that they could be closer to family.

Before Brexit came into force last year, the spouses of British citizens could move to the UK at any time under EU freedom of movement laws.

That option became unavailable when the UK left the European Union.

However, the British Government allowed non-British spouses to apply for settled or pre-settled status until March next year.

The first challenges of the #Brexit rules became apparent;

Corinne and Brett Giles are forced to live in Donegal and Darya due to immigration law on the borders of the Republic of Ireland and Northern Ireland. pic.twitter.com/o9TrDw59Fr

But the UK Home Office has ceased to recognize the EU family permit that Brett and Corinne were issued with, forcing the couple to apply for a UK permit.

Brett moved across the border in March having read guidance from the British Government that urged British citizens to return to the UK before the end of December last year.

Five months later, however, Brett and Corinne still remain separated with Corinne unable to apply for healthcare vacancies in Ireland or the UK.

The 48-year-old has been living in a single room in Letterkenny and says that she is "emotionally drained" by the ordeal.

"I’m absolutely emotionally drained and exhausted mentally and physically," she told the Guardian.

"I’m living in this constant state of anxiety every day, checking emails that will determine my future.

"All the time the gap in my working career is growing substantially. Being kept in the dark with absolutely no feedback or communication from the Home Office is absolute torture. I never in my wildest dreams thought that two years after coming to Europe, I would be sitting on the couch, unemployed, disillusioned, disheartened."

She said that she just wants a "normal life" and added that she feels alone in a foreign country while all of her family live in the UK.

The Guardian reports that at least a dozen other couples are facing similar situations.

The Home Office refused to comment on individual cases but said that each case is processed as quickly as possible. A Home Office spokesperson told the Guardian that cases were "considered in strict date of application order" and suggested a five-month backlog for new applicants.

Labour MP Peter Kyle said that the Home Office has "completely forgotten" that it is supposed to serve British citizens.

"To be so hostile and obfuscatory towards a British citizen, to make it difficult for a British citizen to even get information on how to resolve a situation caused by government policy, is borderline unconstitutional," Kyle said.

SDLP MP Colum Eastwood also condemned the "obstinancy" of the Home Office for not carrying out necessary checks.