Cork family forced to flee home due to sinkhole

The family of five in Blackrock, Cork reported that they saw a crack with bubbling water in their driveway, which eventually led to a sinkhole appearing. 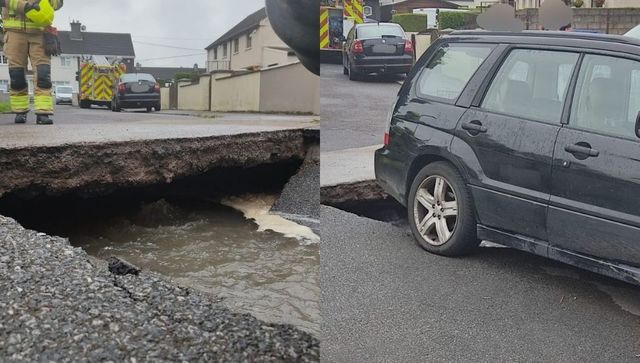 A family in Co Cork has been forced to move out of their home after a sinkhole appeared in their driveway.

The family of five from McGrath Park in the Blackrock area of Cork reported that they saw a crack with bubbling water in their driveway.

Cork City Fire Brigade attended the scene and it appears the sinkhole occurred due to a burst water main which also caused structural damage to their home.

It's believed a sudden release of water washed away the soil foundation to the concrete driveway and found a route underneath the house to cause the damage.

Crews are currently in attendance at a burst water main in McGrath Park, Mahon. ESB Networks, Bord Gáis Energy, Irish Water Uisce Éireann and a building inspector are all at scene.

Speaking to Cork radio station RedFM News, Pat Britton, Regional Operations Lead from Irish Water, says their top priority is supporting the affected family and making the area safe: "Irish water along with our colleagues in Cork City Council are carrying out a detailed investigation of the cause of the incident at McGrath Park as result the burst water main, it lead to a collapse of a section of ground around the burst itself.

"Our main thoughts really are with the family. It's very traumatic and difficult time from continuing to support them, are our top priority at this point, along with making the area safe and technical teams and insurance people are on the ground to assess the situation and see what work is needed there."

No other homes have been affected and a technical team is on site at the house to assess the damage.