Why young people are joining the Ancient Order of Hibernians

“It’s a group of like minded individuals [and] helps you out with your heritage. It’s really cool to see how we help the neighborhoods, all the fundraisers that we do that support Irish Americans.” 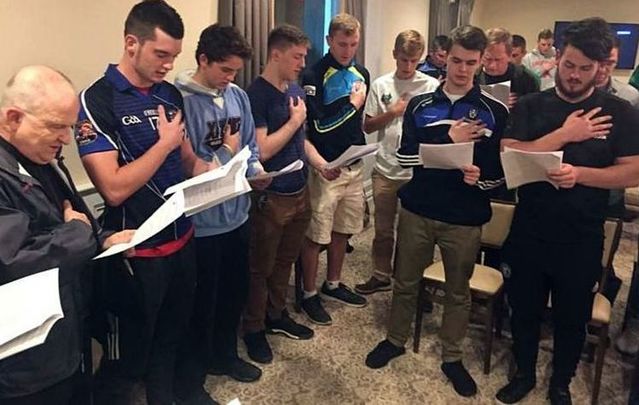 Sean Brewer, at the back center, swearing an oath to the AOH.

The Ancient Order of Hibernians is, as the name suggests, one of the oldest Irish groups in North America.

Founded in 1836 its original aim was to care for the often destitute Irish who arrived on America’s shore, as well as stand up for safer working conditions for the working class.

With an aging profile, the organization has recently taken to targeting the younger Irish Americans for recruitment.  One such individual is New Jersey man Seán Brewer, who is helping to recruit fresh blood at Iona College, in New Rochelle, New York.

The Thomas Addis Emmet Division 17 is, he says, “one of the biggest and youngest divisions” in the AOH and plenty of the new members have only just reached adulthood: “A lot of them at freshmen… so mainly 18-year-olds.”

In total, some two dozen new people have joined which makes it the “biggest class and youngest class, we dropped the age average from like 50 to 25/30 because so many of us have joined.”

Brewer has little doubt of the continued relevance of the organization: “It’s a group of like-minded individuals [and] helps you out with your heritage. It’s really cool to see how we help the neighborhoods, all the fundraisers that we do that support Irish Americans.

If you’d like to join the AOH - and they’re always recruiting! You may do so here.