Pat and Attracta Murray have been overwhelmed by public support since their Westmeath home was destroyed in a fire on December 29. 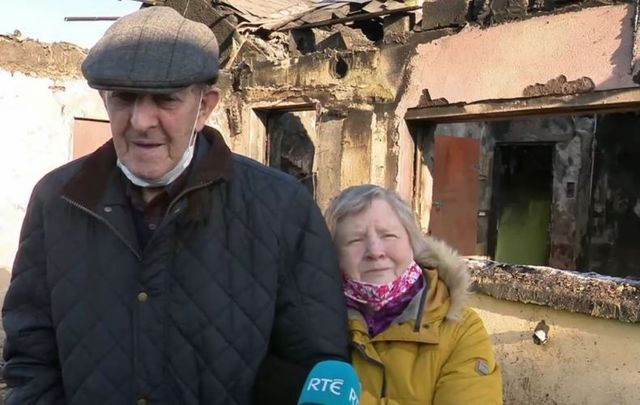 Pat and Attracta Murray barely escaped the blaze with their lives but lost all of their life-long possessions. RTÉ News screengrab

An online fundraiser has raised almost €90,000 to help an elderly couple rebuild their home after it was destroyed by a fire.

Pat and Attracta Murray of Rathowen in County Westmeath have thanked the public for their generosity and said that they will rebuild their home with the money donated from all over Ireland over the past two weeks.

Their house was badly damaged when a blaze broke out in the early hours of December 29, just one day after Pat Murray's 90th birthday. Fortunately, the couple escaped unharmed but lost all of their life-long possessions.

"Everything is gone. We have nothing," Attracta Murray told RTÉ. "We just came out in what we're standing in."

Pat and Attracta are both very popular in the local Rathowen community and Rathowen Community Development - a local community organization - set up an online fundraiser through GoFundMe to help rebuild their family home.

"The Murray family you could count on in times of need, true neighbors were there when called upon. Now, we Rathowen Community Development are asking if you could please support our efforts to help raise some vital funds to rebuild their home," the group said on GoFundMe.

Emily Lloyd of Rathowen Community Development paid tribute to members of the public who donated to the GoFundMe and told RTÉ that donations are still flooding in.

"Within 48 hours, there was already €20,000 collected and it's still rising, and rising rapidly," she told RTÉ News.

Meanwhile, Pat and Attracta Murray also thanked the public and said that they were overwhelmed by public support.

"Everybody has been so good," Attracta Murray told RTÉ. "There's phone calls every day to see how are and people calling to see us."