The Irish public can take visit the US Embassy on October 15 as part of Open House Dublin, which grants access to some of the city's most prestigious buildings. 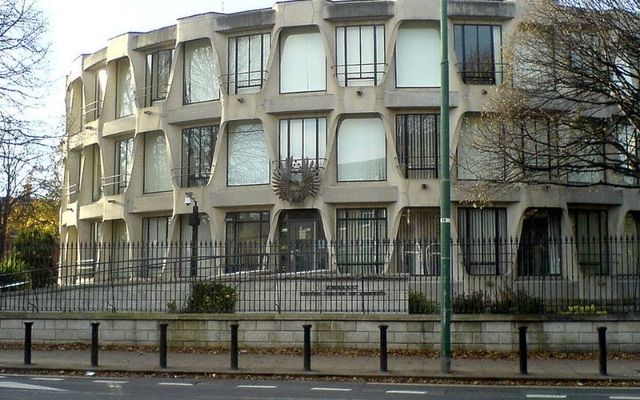 The US Embassy in Ballsbridge is an iconic building in the city. Wikimedia Commons

The Irish public will be offered a rare opportunity to tour the inside of the US Embassy in Dublin on Friday night as part of an open house weekend in Ireland's capital.

Run by the Irish Architecture Foundation, Open House Dublin grants access to some of the city's most prestigious buildings, which are not usually open to the public.

The US Embassy, located in Ballsbridge and formally known as the Chancery Building, will participate in the event for the first time and will be open to the public between 6:30 p.m. and 7:30 p.m. on Friday, October 15.

We’re delighted to be taking part in #OpenHouseDublin this evening. The tour is completely booked up, but let us know if you’d be interested in having a peek inside our Embassy in the future. ⁦@IAFarchitecture⁩ https://t.co/MXPdGD7GB5

Former President John F. Kennedy championed the building, which was described in Congress as a "pile of flap-jacks with a pat of butter on top" during its construction.

Kennedy, however, sadly never lived to see the completed Embassy building, although Presidents Richard Nixon, Bill Clinton, and Barack Obama have all visited the Chancery Building during state visits to Ireland.

The Embassy famously made headlines during Obama's state visit in 2011 when an armored limousine known as "the Beast" got stuck on a security ramp while exiting the compound.

The US Embassy has outgrown the famous building, however, prompting officials to search for a new premises.

Christopher Wurst, the acting Deputy Chief of Mission at the US Embassy, told the Irish Times that the Embassy has an agreement to buy a site at the location of old Jury's Hotel, which is located across the road from the Chancery Building.

Wurst said that it could take several years for the Embassy to make the move due to planning permission, design, and construction.

"We will be here for a good while yet," he told the Irish Times.

Wurst said that it is still unclear what will happen to the iconic Chancery Building when it is eventually vacated for a new premises.

The US Embassy is one of numerous fascinating buildings open to the Irish public over the weekend.

Open House Dublin includes tours of the Abbey Theatre, Heuston Station, the Iveagh Markets, and many more locations, while several walking tours of the city are also available.

Tickets for the US Embassy tour have unfortunately been booked out.