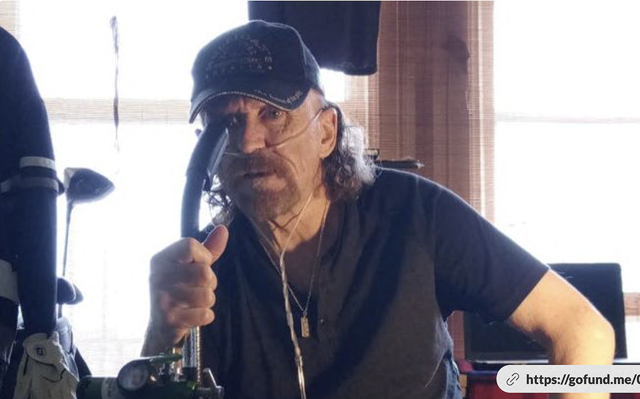 An Irishman is desperately battling a terminal illness in San Francisco so he can bid a final farewell to his elderly mother who is confined to a nursing home in Dublin.

Richard “Zac” Cusack struggled as a landscaper and painter when the Covid pandemic struck America.

Then he was diagnosed with a rare terminal illness, HPS (Heptopulmonary Syndrome).  It is an uncommon condition that affects the lungs of people with advanced liver disease and leaves the lungs unable to deliver adequate amounts of oxygen to the body.

Some patients survive with a liver transplant. But Cusack says surgeons in San Francisco maintain he doesn’t qualify for a transplant because an over-abundant need for oxygen deems the procedure too risky.

With time running out – Cusack believes he has at most a few months to survive – he wants to give his 88-year-old mother Pauline Cusack one last hug before he dies.

She is in Elmhurst Nursing Home in Glasnevin, Dublin, and the pair have not met for nine years. Cusack, 58, moved from his home in Terenure, Dublin, to America 34 years ago.

Pauline was only given permission to receive vaccinated visitors a few weeks ago – and that’s when her son and his supporting friends started a plan for a final farewell meeting which he hopes to keep this month,

The prospect of a trip was improved last weekend when the Irish government removed the U.S. from the mandatory hotel quarantine list that required travelers arriving in Ireland to isolate at a hotel for 14 days.

Cusack has a 24/7 home oxygen-making machine on loan from a San Francisco Hospital. He and his friends are attempting to purchase a Federal Aviation Administration-approved oxygen concentrator for the flight home. They are also examining the welfare and palliative care system in Dublin to find a place for him to stay in the city.

His mother is aware of his condition and is looking forward to their meeting.

Cusack said, “My first words will be, ‘Hi, mum, I’m home.’ And then I will recall a phrase she often used – from the womb to the tomb.

“I have a big hug ready for her and I know it will be overwhelmingly emotional.”

Zac’s friends have raised more than half a $7,500 fund for the oxygen concentrator and airfares.