Drawing inspiration from the Proclamation of 1916, the parade extended the hand of friendship to New York’s LGBT, Muslim and immigrant communities. 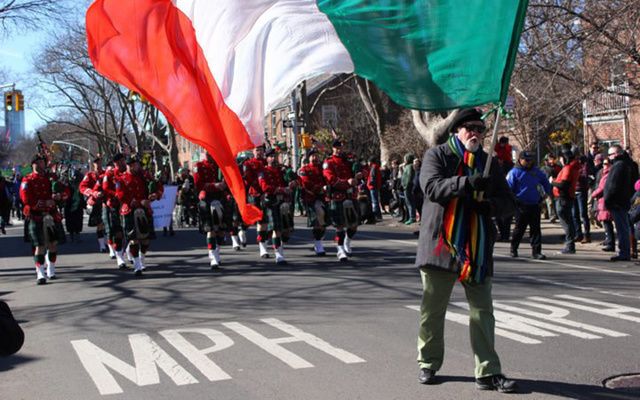 Drawing inspiration from the Proclamation of 1916, the St. Pat's forAll parade extended the hand of friendship to New York’s LGBT, Muslim and immigrant communities. QNS/Twitter

Sunday saw the return of the St Pat’s For All parade in Sunnyside, Queens. The march has been held annually since 2000 and offers a gathering which celebrates and cherishes the diversity of New York City and local communities in Queens. Drawing its inspiration from the 1916 Proclamation which declared the new Republic would set policy whilst “cherishing all of the children of the nation equally”.

Register to march in the March 05, 2017 St. Pat's for All parade as we celebrate Irish culture and identity. Visit https://t.co/7o6EKuojfX pic.twitter.com/9AFmBq9uhN

There are an estimated 260 parades in New York alone that celebrate St Patrick’s Day but some of them - including the biggest one down 5th Avenue - have been historically dogged by controversy regarding issues of inclusivity.

Always a great time at the #StPatsForAll Parade in #Queens! Yes, we all belong & that's what this parade is all about..INCLUSION. pic.twitter.com/NrEbwKXdqk

2016 was the first time members of New York’s Irish LGBT community were allowed to march and whilst their presence was welcomed by most attendees - a small number of spectators dissented.

“I think [gay Irish people] don’t belong in this parade. It’s about Irish history and Irish pride. There is no reason for them to be here,” one man told the New York Post. “The gay issue being part of this parade makes no sense. They have their own parade, their own issues. It has nothing to do with Irish history. We don’t have techno music here. They don’t have bagpipes at their parade.”

We all had a great time at this years St Pats for All parade! Have a happy #StPatricksDay @GOALny @NYPDCeremonial @FDNY pic.twitter.com/duKzAsM6Or

This year St Pat’s declared the parade “also a rally of support between LGBT, Muslim and immigrant communities.

“As immigrants, Irish people remember our own story as refugees fleeing famine and poverty only to arrive on the shores of the US to encounter prejudice. This experience has shaped our lives and history. As Irish people, we have transformed the anguish of the past into a compassionate advocacy for human rights across the globe. We continue to press for immigration reform. Among the estimated 50 thousand undocumented Irish there is anxiety about the future. As Irish New Yorkers we raise our voices in support and welcome our immigrant and Muslim neighbors affected by the executive orders from the President Trump administration on refugees from Syria and on visitors from predominantly Muslim countries. As New Yorkers we rally together.”

And despite President Trump being a Queens local, attendees were keen to stress the spirit of the parade was meant to challenge the ethos of the new administration.

“This is not a place that believes what he believes,” State Senator Michael Gianaris told CBS New York. “If he ever represented this community, that was a community that was gone long ago, and thankfully so.”