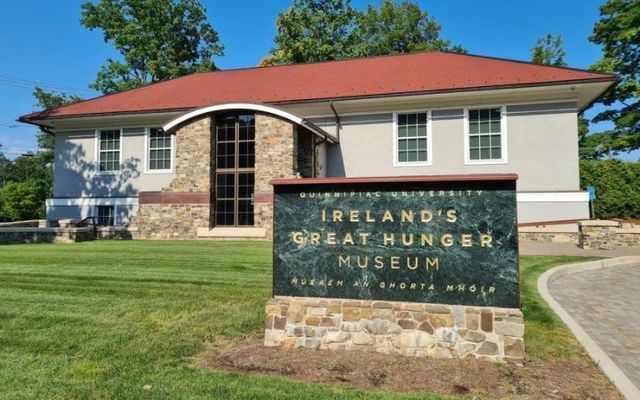 There's one indisputable fact in the ongoing conflict over Ireland’s Great Hunger Museum at Quinnipiac University in Hamden, Connecticut – the museum has been shut for the past two years and will continue to be closed to the public for at least another 24 months as the university prepares to transfer the collection to a new, as yet unconfirmed location under the direction of the Gaelic-American Club (GAC) about 30 miles south in Fairfield.

Save Ireland’s Great Hunger Museum (SIGHM), the group which sought to work with Quinnipiac to immediately reopen the museum in its first home, says there’s an alternative to keeping the country’s largest collection of Irish Famine art and artifacts in mothballs – welcoming in-person visitors once again to the museum while working collaboratively with the GAC to make a new Fairfield museum a reality.

“We feel the museum belongs to the public, and I think we can all agree that having it behind closed doors well into the future benefits no one,” Turlough McConnell, SIGHM leader, told the Irish Voice, sister publication to IrishCentral.

The GAC has formed a corporation, Ireland’s Great Hunger Museum of Fairfield, Inc., and is pressing ahead with plans to acquire a new building for the museum not far from its own headquarters on Beach Road in Fairfield. The group is fundraising for what will be a multi-million dollar commitment, and on Monday announced that it had secured the support of the national board of the Ancient Order of Hibernians and several Connecticut Irish organizations.

"The Ancient Order of Hibernians in America most certainly supports the GAC's new role as managers and custodians of the Great Hunger Museum collection," AOH National President Daniel J. O'Connell said in a press release issued by the corporation.

McConnell and his group met with the Connecticut State Attorney General’s Office last week about its ongoing investigation into Quinnipiac’s decision last August to permanently close the museum devoted to the tragedy of Ireland’s Great Famine which opened in 2012 under the stewardship of former university president Dr. John Lahey. Earlier this month, Quinnipiac officials announced that it would partner with the GAC to move the museum’s contents to a new location in Fairfield, even though Attorney General William Tong has not announced the findings from the investigation.

The attorney general’s representatives, McConnell said, were “surprised” that Quinnipiac made the announcement. And having the museum’s contents unavailable to the public for years to come is unsatisfactory, he added.

“As we approach St. Patrick’s Day, let us press forward to reopen the museum right where it stands, for the next two years while the people of the GAC commence their ambitious plan to renovate and rebuild in Fairfield. Save Ireland’s Great Hunger Museum, Inc. is ready to reopen the building in Hamden at a moment’s notice,” McConnell’s group said in a press release issued Monday night.

“At a time when Ukraine is being ripped to shreds by brutal foreign forces, and millions of refugees are flooding the west, we must honor not only our Irish ancestors, but refugees everywhere, who have fled from starvation and cruel government policies, seeking new hope, a new path, and a new life for generations to come.”

The statement struck a conciliatory tone towards the GAC, which met with Quinnipiac officials on several occasions to outline a plan for the museum’s future.

“We stand with our brothers and sisters of the Gaelic American Club in supporting the future of Ireland’s Great Hunger Museum. Our approach, all along, has been to reopen the museum in the building that was created specifically for it. It appears that Quinnipiac has no interest in doing what is best for the collection or, for that matter, for Irish America,” the statement continued.

“The inquiry by the attorney general is still ongoing, and any announcement about the future disposition of the collection, good or bad, is not only premature but arrogant and disrespectful of the office, in whose care the collection rests. The museum belongs to the people. Quinnipiac has been a caretaker for it, and in recent years a poor one at that.

“Let us raise our voices to tell the awful truth: the museum will be closed for at least two (and likely more) years while the collection sits, collecting dust, mold, and mildew, uninspected by the public or neutral parties. Notably absent is any trained curator or art historian. The university has shown that it cares not for keeping the collection together, since President Judy Olian is on record last August stating she intended to sell off parts of it. It may still be her intent today – to keep the best art for the university while releasing the less precious to the GAC, who has no idea of what the collection contains. Good faith abounds in the GAC. No faith abounds at the university.

“Raising the amount of money required to renovate a building in Fairfield has been estimated at $3.5 million – the truth could be twice as much. Does any organization have the wherewithal to do that heavy lifting? We worry. Deeply.”

Ireland’s Great Hunger Museum of Fairfield announced on March 11 that Ryan Mahoney, who served as executive director of the Quinnipiac museum from 2017 to 2021, has joined the group as an advisor. He is currently employed at Springfield Museums in Springfield, Massachusetts, and formerly worked at the Irish American Heritage Museum in upstate Albany, New York.

“To say I am excited to have the opportunity to continue to work with this collection and help in the development of its new home would be an understatement,” said Mahoney. “This collection is powerful. Not only does it tell the story of Ireland in the 19th century, but it also draws parallels to many contemporary issues that we see worldwide. The artwork here inspires conversations and provokes questions. It makes a topic like the Great Hunger more accessible to visitors of all ages.”

His statement added, “The Gaelic-American Club should be commended for the work that they have done to keep this collection together and home here in Connecticut. Ireland’s Great Hunger Museum of Fairfield, Inc. is assembling an impressive team of professionals to make sure this project is done correctly. This joint effort will secure the future Ireland’s Great Hunger Museum collection and ensure that it will thrive for generations to come.”

Other Connecticut Irish groups supporting the move to Fairfield include the AOH divisions in the state and the St. Patrick’s GAA club.