Nancy Murray celebrated 50 years in charge of the Peveril and the Peak in January of this year. 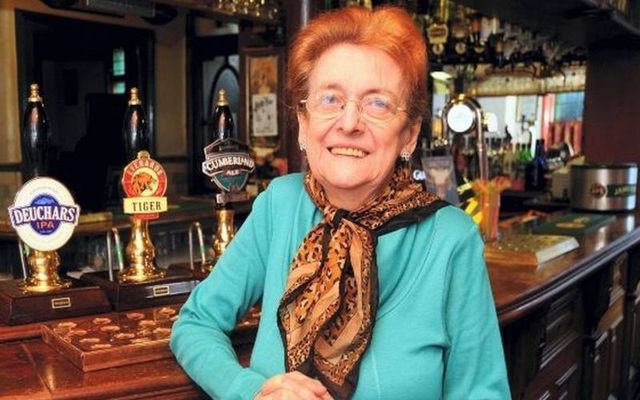 A 91-year-old Irish great-grandmother believes that she could be the world's oldest landlady as she celebrates 50 years of pulling pints at her pub in Manchester.

Nancy Murray, from Inishowen in County Donegal, took over the iconic Peveril of the Peak in Manchester in 1971 with her husband Tommy Swanick, who sadly died in 1981.

She was initially reluctant to take over the pub due to its poor reputation but has never looked back since taking charge and now oversees one of Manchester's most popular bars.

Nowadays, she is widely regarded as Britain's oldest and longest-serving landlady and she believes that she might be the oldest landlady in the world as well.

"People say I'm the oldest landlady around. I certainly don't know anyone who is older than me and still has a pub," she told the Daily Star newspaper. "I don't do as much these days, but the Guinness Book of Records might contact me, and I wouldn't mind that at all. It would be great publicity."

Murray, a former mental health nurse, first arrived in Manchester in 1950 after a short stint in Glasgow and said that she still loves to meet Irish customers in the bar.

"I love meeting Irish people here and I say, 'There will be one behind the bar for you when you come back'. I left Donegal when I was young, but I've never lost my accent."

Located on Manchester's historic Great Bridgewater Street, the Peveril of the Peak has been popular among local celebrities for decades. Harry Potter star Robbie Coltrane frequently visited the pub while filming "Cracker" in Manchester, while Liam and Noel Gallagher of Oasis and Irish-English actor Steve Coogan also popped in from time to time.

Eric Cantona, one of the most iconic players to ever play for Manchester United, also visited the pub on occasion during his playing career in the 1990s and was one of the first people to visit the establishment when it reopened in April.

However, Nancy's biggest joy does not come from meeting world-famous celebrities. Instead, she prefers to hear how the pub has impacted the lives of local Mancunians.

She told the UK Independent how a taxi driver had once dropped her home and told her that her fare was free because of all the happy times he'd spent in the pub and said that she got a thrill when a nurse administering her coronavirus vaccine remarked about how much she loved the iconic establishment.

"You never get tired of hearing that," her son Maurice told the Independent.

Nancy, however, has endured her fair share of heartbreak since opening the pub 50 years ago. She lost her husband to cancer in 1981, while her two sons Paul and Thomas both died in their 50s in quick succession, leaving her devastated.

Nancy suffers from severe arthritis, which limits the amount of time she can spend behind the bar, but she is still looking to the future.

The pub will be throwing a party in the summer to celebrate her 50 years in charge, while she also plans to celebrate the pub's 200th birthday in 2024.