A round of up the GAA matches taking place on the ground in New York this week. 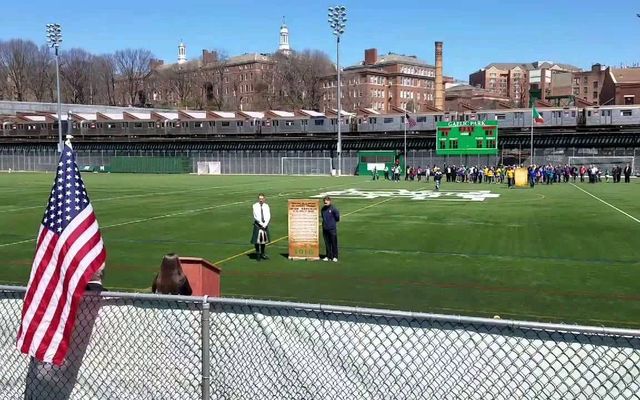 Gaelic Park, the home of the GAA, in New York.

From the early exchanges of this intermediate football contest, it looked as if Cavan were poised to take the spoils as they registered three points in the first five minutes. Emmett McGoldrick opened the scoring with a spectacular long-range point and Eoghan Carew tagged on a point for a foul on Sean Smith.

Carew was the instigator of the next score as he set up Adrian Lang for a point. Indeed the Breffni Boys could have been further ahead as keeper Sheridan was forced to execute two crucial saves before Shane Slattery opened Mayo’s account.  Carew slotted over another point before a series of direct deliveries to Slattery began to pay dividends. He won possession, pointed frees and set up Pat Murphy for a goal.

Then just before the water break big Emmett slid over a point, soccer-style, to tie up the game. After refueling, Slattery was on target again but Cavan enjoyed a very productive spell for the remainder of the half.

Carew coolly floated over a 45 and two minutes later set up Smith for a goal. Two more Breffni points followed from Harry O’Connor and Carew before a fine long-range effort from Tom Conway left his team trailing by 1-8 to 1-5 at the intermission.

Both teams exchanged a brace on the changeover; Smith and McGoldrick scored for the Blues, while Dave Hansburg and Slattery replied for Mayo. The Westerners stepped up their performance as their superior fitness, dogged work-rate and timely transitions from defense to offense set the scene for scores, while Pa Glynn directed operations from the hub of defense.

Tom Conway banged in a goal after big Dave Hansbury deftly placed the ball in his path, plus he floated over a couple points as well. By the time of the mandatory water break they had edged in front by 2-9 to 1-11.  Carew soon had his team level after he pointed for a foul on Smith. Then Mayo had a rather fortuitous score, a mis-cued or under-hit 45 managed to elude a thicket of players in the goalmouth to nestle in the corner of the net.

Cavan were undaunted and fought back with Carew (two) and Christy 0’Dowd reducing the deficit to the minimum.  However, hopes of a draw or a win were quickly eliminated as David Pond blasted the ball to the net to see Mayo safely over the line.

One great supporter and servant of Mayo football, Pat Gavin, though he was not at the game would be very proud of the result. He certainly was there in spirit as he generously sponsored the jerseys this year.

Man of the Match: Tom Conway.

The hot and humid weather did little to cool the ardor or lessen the clash of the ash as these teams served up a fine sporting spectacle. Prior to the throw-in, there was a minute’s silence in memory of the late Fonzie Farrell, partner of Tipperary and GAA stalwart Therese Crowe. Fonzie was a very familiar figure at Gaelic Park who recently passed away.

Hoboken started well with Harry O’Connor opening the scoring before Darragh Walsh blasted in a goal.  Hoboken continued to have the better of the exchanges as Paul Jordan hit over a point and the big corner forward would go on to have a very impactful game.

Tipp soon found their form as David Pond pointed and Liam O’Donovan quickly added a goal. Hoboken’s Billy Hanlon was supplying good ball to his forwards, and corner man Jordan availed of the opportunities to have his team ahead by 1-6 to 1-4 with Michael Sheedy floating over points to keep his team in touch.

In the second quarter Tipp hit a stellar patch, hitting 1-7 to a lone point for Hoboken. John O’Neill got the goal while Sheedy contributed handsomely to the tally as did Nick Corbett and Pond. Tipp seemed to be in the driving seat as they led by 2-11 to 1-7 at the break.

Hoboken got a great boost on resumption as a deflection from a Darragh Walsh shot was ushered to the net by Paul Loughnane and Walsh followed up with a well-struck point.

However, Tipp answered with a lovely effort from the wing by O’Neill and a free from Sheedy. But by the last water break Hoboken with three unanswered points by O’Connor, Jordan and Sheehy had reduced the deficit to two.

Refreshed from the hydration, Jordan and Corbett slotted over a brace to draw level. Now the fat was in the fire as Pond combined well with O’Neill to score and Sheedy was on hand with another.

It was tit for tat as two long range frees from O’Connor produced parity again before a 65 from Sheedy edged his team in front just long enough for Declan Sheehy to land a fine effort from the wing.  Then Tipp looked set to jump back in front as O’Neill broke a tackle and headed goalwards with a score looking imminent, but the referee awarded a free for over-carrying.

The Tipp bench went apoplectic; they thought the decision should be their way for a chop rather than over-carrying. Yes, one for the philosophers to ponder -- which came first, the over-carrying or the chop ?

Hoboken made the most of Tipp’s misfortune to get over the line with late points from Harry O’Connor and Sheehy. After the final whistle, the sideline was a vista of contrasting emotions. Hoboken were elated, while Tipperary were infuriated.

Man of the Match: Paul Jordan.

Rangers returned to the premier division of New York football after nearly two decades of performing in the lower regions with a rather facile victory over a makeshift Donegal squad.

The writing was on the wall in the first quarter as Shane Holman banged in a goal and Kevin Loane floated over points to have them ahead by 1-3 to 0-1, at the water break, with Ollie McLean interrupting the scoring streak.

By halftime the lead had swelled to 2-7 as Brian Twomey had a goal and John Power, Conor McIntyre and Kevin Loane had added points, while Donegal had been limited to two from Ollie McLean and Conor Regan.

On the restart Willie Brazil chipped in with a few points before the floodgates opened, with goals from James Breen and Kevin Loane.  Sensibly referee John Fitzpatrick applied the clemency clause and concluded the proceedings early.

I’m sure Rangers will have tougher days in the senior ranks, but a win is a good start for Twomey’s boys and Donegal will definitely have better days ahead.

Man of the Match: Kevin Loane.