Irish American Martin Beirne, who was seriously injured in a road accident in The Bronx, says the support he and his family have received is "extremely humbling," 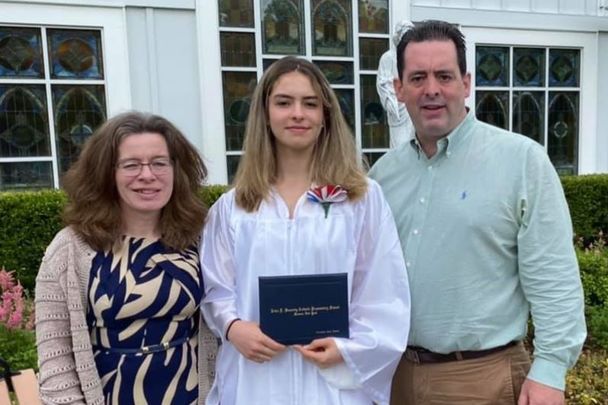 Martin Beirne with his wife and daughter. Irish Voice

An early morning day in August of 2021 started out routinely for Martin Beirne, an electrician/foreman with Local 3 IBEW.

He was driving to work on the Major Deegan Expressway in the Bronx at about 5:45 when he noticed two cars stopping in front of him due to a blockage in the lane.

Beirne stopped his vehicle too. But the driver right behind him didn’t stop or even slow his car down.

There was a crash. And life for 52-year-old Martin Beirne hasn’t been the same since, nor will it ever return to the way it was.

“Through no fault of your own, everything can change in an instant,” Beirne told the Irish Voice, sister publication to IrishCentral, during a recent interview.

“Sometimes my wife and I scratch our heads and wonder how our lives changed so drastically.”

The force of the car that crashed into Beirne’s drove his trunk into the back seat. He could not move, nor was he able to until the FDNY arrived to extract him from the vehicle.

Prior to impact, all he could think of were the words of his late father Frank Beirne, a native of Co Leitrim and former chairman of the New York City St. Patrick’s Day parade. The elder Beirne was a bus driver with the MaBSTOA union, and his advice was heeded by his son.

“He’d say, ‘If you know you are going to be in an accident, put your neck back against the headrest so you don’t get whiplash,’” Beirne recalled.

Whiplash didn’t happen, but a number of other serious injuries did, none of which were picked up by physicians at Lincoln Hospital in the Bronx, where he was transported by FDNY medics. X-rays showed nothing was broken, and he was discharged.

“They said I was fine. So I figured I was just banged up, I’d be sore for a while and then I’d be okay,” Beirne recalled.

Come Labor Day weekend, his body went into pain overdrive. His right foot started to go numb; an MRI showed four herniated discs in his lower back. A bothersome knee got worse; turns out he was walking around with a torn meniscus, a torn ACL, and other injuries.

Beirne required an immediate knee replacement, such was the damage. After it was done he started having spasms in his arms, legs, and back, which his physician told him was usually indicative of damage further up his spine. Sure enough, a further MRI showed six more herniated discs, equaling 10 in total.

Ever since that fateful August morning, Beirne’s life has been one of escalating pain and deep frustration made worse by a bureaucratic insurance knot that gets tighter by the day.

The driver of the car that crashed into his was using a rental from New Jersey. He lives in Connecticut, had minimum insurance on the rental, has no assets, and no job. A civil against the driver would be fruitless.

Because he has been out of work for more than a year, his Local 3 insurance was terminated. And the insurance his wife has through her job as an employee of the City of New York was on until it was terminated, too.

Now, instead of being a foreman on job sites such as the LaGuardia Airport overhaul, or the Long Island Rail Road’s East Side Access project, Beirne spends his days battling with insurance companies and trying to somewhat recuperate from his life-changing injuries. The doctor who had been treating his knee says he can no longer accept him as a patient because the New York State no-fault insurance has run out.

“It has been such an uphill battle, an absolute nightmare,” says Beirne of the uncertainty of insurance going forward. “The way things work and how complicated they can be is unreal.”

He’s had to find a new knee doctor which is proving difficult – “the first thing they want to know when you call is what kind of insurance you have,” – and hasn’t had physical therapy for weeks. Doctors who have seen him say that he will likely never work again, and further surgery on his knee will be needed which could hopefully prove beneficial to the problems with his discs.

“It is very, very tough,” Beirne says of his present day-to-day life. “There are times when a coffee pot is too heavy to hold. I can sit for about 20 minutes and then I have to stand, and stand for 20 and then sit. I can walk very short distances and I have a cane.

“Before I used to be able to do anything physically as I was very fit. I worked in carpentry, plumbing, I’m a trained electrician. I loved the challenges with my job, being a foreman on some of the biggest projects in the city, learning about how new technology works. But now…,” Beirne trails off.

“I feel like all the knowledge and information I have, all the things I have done, means nothing.”

But the support of family and a vast network of Irish American friends has made a bad situation more bearable. The Beirnes have long been active in Irish groups such as the Leitrim Society of New York and the Ancient Order of Hibernians.

A group of supporters will host a fundraiser to defer the family’s mounting expenses on Sunday, October 30 at Downey’s Bar and Grill, 5790 Mosholu Avenue, Bronx, from 2-7 pm. There will be raffles and entertainment.

“I honestly do not know what I would do without my friends and family. Mentally, I would be in a much worse place. The support is extremely humbling,” Beirne says.

103-year-old Irish priest in Washington passes away, a great loss and huge legacy