Tom McGrath, 68, plans to run a marathon a day from Boston to New York City to help raise money for the American Wheelchair Mission. 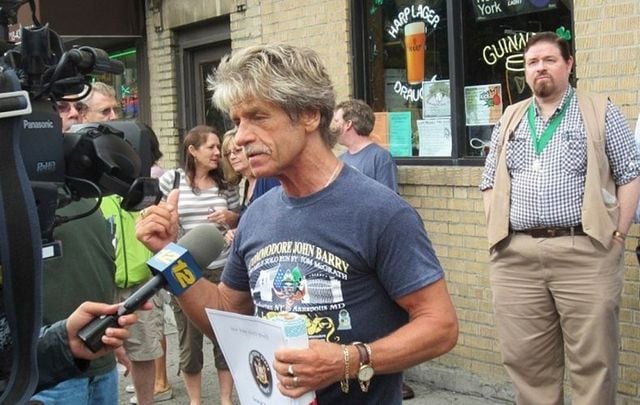 Tom McGrath, 68, plans to run a marathon a day from Boston to New York City to help raise money for the American Wheelchair Mission.

A 68-year-old Irish runner plans to run a marathon a day from New York to Boston to raise money for charity.

The weather is cooler. It could be his native Fermanagh. So it’s time for Tom McGrath to run.

McGrath, the 68-year-old ultra-distance runner, Manhattan bar and restaurant owner, and recovering alcoholic, is putting on his running shoes once again - this to run a marathon a day from Boston to New York City to help raise money for the American Wheelchair Mission.

The run is being co-sponsored by the Knights of Columbus and the Ancient Order of Hibernians.

The “Miles 4 Miracles” run, said a release, seeks to change lives through mobility by helping the American Wheelchair Mission distribute much-needed wheelchairs to veterans’ hospitals, fire houses, ambulances, churches and to the poor throughout the world.

Sponsorships are available at $150 (the cost for each wheelchair) for each of the 225 miles of the run.  Tom hopes to raise enough money for at least 225 wheelchairs when he completes the race.

In 1977, McGrath broke the Trans-Am world record, running from New York to San Francisco in 53 days.

He became a staple in the New York area for running six marathons in six days, year after year, to bring shoes to kids in need.

Three years in a row, he looped the reservoir in Central Park for 1,000 miles to help various charities.

McGrath was also the winner of the very first 24-hour race in Ireland and in '96 was chosen as a torch bearer for the Olympic Games.

He is the owner of the Black Sheep bar and restaurant in Midtown Manhattan.

A documentary on Tom McGrath’s ups and downs in life entitled “Every Five Minutes” was recently an award winner for Best Short Documentary at the Big Apple Film Festival. “The Black Sheep,” a book on Tom’s life, was published in 2016.

Fundraisers will be held along the route in Worcester, MA; Stafford, CT; Hartford, CT; New Haven, CT; and Stamford, CT.

The American Wheelchair Mission, meanwhile, is a non-profit organization with a goal to deliver brand new, free wheelchairs and mobility aids to physically disabled children, teens and adults throughout the world who are without mobility, or the means to acquire a wheelchair.