Scott Ward and his friend Derek O'Brien began their five-day trek in the early hours of the morning on Sunday, June 27, and walked more than 10 hours every day before finally reaching the famous tourist destination on Friday. 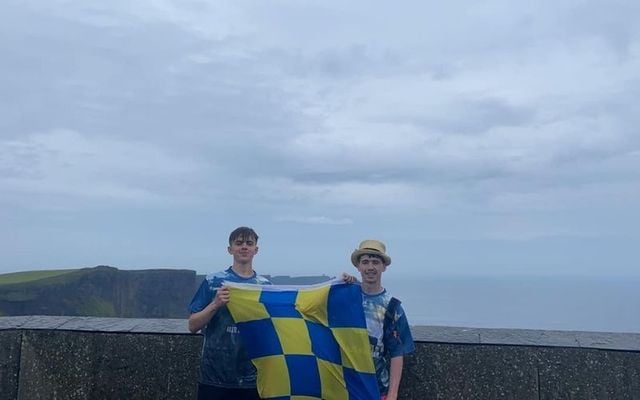 Two Irish teenagers completed a grueling five-day 250km walk from Dublin to the Cliffs of Moher to raise almost €70,000 for a special needs school.

Scott Ward and his friend Derek O'Brien began their five-day trek in the early hours of the morning on Sunday, June 27, and walked more than 10 hours every day before finally reaching the famous tourist destination on Friday.

The pair had been talking about the idea for months and initially hoped to raise €500 for the Abacas Special School in Kilbarrack.

"I wanted to do something mad, something you wouldn't really see. I love doing things that people haven't done before," Scott Ward told IrishCentral.

"A crazy walk across the country was a great opportunity to do a fundraiser for my cousin's school."

While Scott and Derek had been talking about the idea for several months, they had not been training for it and experienced difficulties during the first leg of the journey between Coolock in Dublin and Moyvalley in County Kildare.

"It took a lot longer than we anticipated because we've never walked that far before. It took 18 hours to get there. It was only supposed to take 13," Scott said.

By the time they reached the Cliffs of Moher on Friday evening, their feet were covered in blisters.

As Scott and Derek traversed the Irish countryside, their story gradually gained traction on social media and in a number of Irish publications. Locals often stopped them during the latter stages of the walk, offering to go to the shop for them or to get rid of their waste.

"You'd be stopped three or four times an hour. People just got nicer as the week went on."

To top matters off, dozens of locals cheered them on as they completed their journey in West Clare on Friday evening.

"There were dozens of people. It was mad, especially because it was lashing rain. I didn't expect people to take the time out of their day to go up to the cliffs in the pouring rain.

"Even the staff came out and took pictures with us."

As their fame built, so too did their fundraising campaign.

At the time of writing, Scott and Derek have raised a staggering €67,000 for the Abacas Special School, obliterating their initial target of €500.

The walk was also an opportunity for the two teenagers to explore a part of Ireland that they'd never been to in a unique manner.

"It was one of the best weeks of my life," Scott says. "I loved the raw experience of walking and meeting the fans and well-wishers. With all the views, all the roads, and all the people, it was so raw. Nothing felt planned at all, we just got up and walked."