WATCH: Irish man finally meets US penpal in Ireland - and they fall in love!

Irish man Fiachra Schusterovi and US woman Mackenzie Udani finally got to meet in person in Ireland this summer after they developed feelings for one another online. 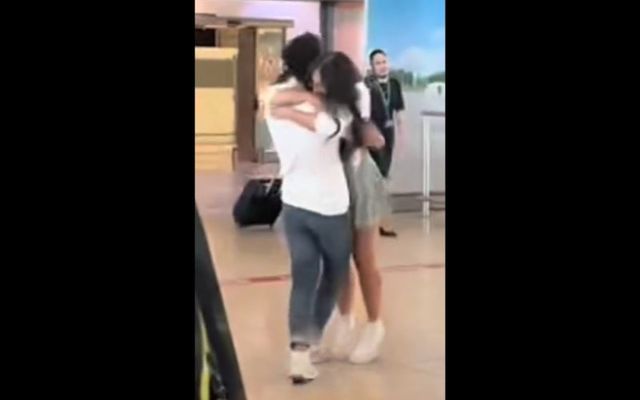 After years of their relationship blossoming online, the two finally met in person in Ireland this summer, an encounter that was delayed by the pandemic.

"I'll get my money back, but I'll never be meeting my Irish penpal of 7 years for the first time," her TikTok says.

Mackenzie recently told the Daily Mail that she and her friend visited Omegle at the age of 14 to make online friends and "instantly clicked" with Fiachra and his three friends from Ireland.

"I immediately was gravitated towards the one Irish boy with dark hair," she said. "That was Fiachra."

Mackenzie, her friend, and the four Irish boys formed an online friendship group that lasted for about a year before they drifted apart, but Fiachra and Mackenzie never lost contact with each other.

They continued video calling almost every day and even sent each other the occasional heartfelt letter. However, they agreed that it would be difficult to sustain a relationship while they were 3,000 miles apart and agreed to remain close friends.

Her father passed away in early 2021 following a battle with cancer, leaving Mackenzie in need of Fiachra's support more than ever.

"Even though there was a 6-hour time difference between Fiachra and I, he still would pick up the phone even if I called him and it was 4 am his time," she told the Daily Mail.

"This was when I realized that he was truly something special that I never wanted to let go of."

The couple finally decided to pursue a romantic relationship in 2021 after six years of an online friendship. According to Mackenzie's TikTok, the two "did dinners, painting, picnics, and baking" all over FaceTime.

However, their fledgling relationship was confined to online dates due to travel restrictions in place during the Covid-19 pandemic.

They reached a point in their relationship where meeting in person seemed "necessary", prompting Mackenzie to book flights to Ireland earlier in the year.

"There were still restrictions in place for Irish citizens to travel to the US, so I thought why not buy a ticket to Ireland and meet him for the first time.

Mackenzie finally got to meet Fiachra's family and friends.

"They were nothing but kind to me and made me feel extremely welcome," she said.

The pair made their relationship official during the short visit.

Mackenzie had to return to the US to complete her final year in college, but she is already looking forward to Fiachra visiting her in the near future.