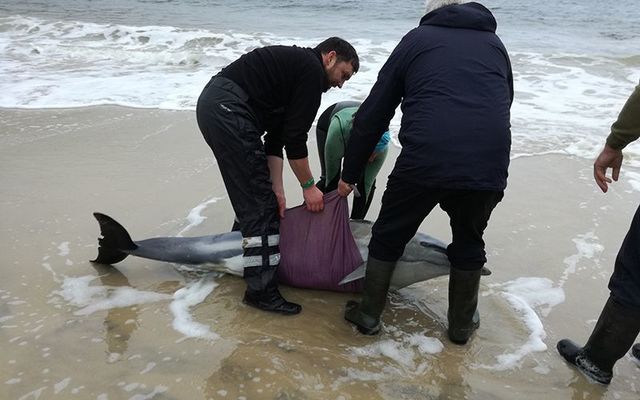 On Tuesday morning, an overcast and blustery day on County Mayo's Achill Island, local man Joey Henry spotted a very worrying sight - five young dolphins beached on the sands of Keem Bay, struggling in vain to get back into the waves.

Both Henry and another local man, Tommy English, sounded the alarm via social media, and very soon more people gathered on the beach to launch an improvised rescue operation.

Posted by IrishCentral.com on Wednesday, November 22, 2017

He told IrishCentral that four of the five dolphins were saved. Tragically, the oldest dolphin perished on the beach, and the younger dolphins attempted to return to the beach several times to try to get him - heartbreaking.

According to Whale and Dolphin Conservation (WDC), thousands of whales and dolphins die each year after becoming stranded on shores. The reasons they wind up in this dangerous situation vary, from a confused group leader to injury due to fishing equipment, to tidal changes, to SONAR disruption.

Read More: Amazing footage of a dog and a dolphin playing in Ireland

Well done to the Achill Islanders who stepped in to save these dolphins.