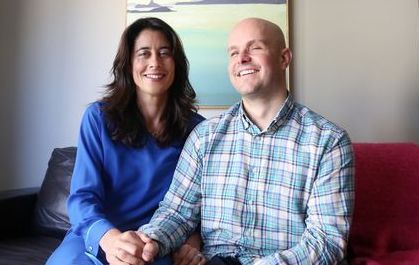 Mark Pollock with his fiancee Simone George at their home in Ranelagh Dublin. RollingNews.ie

Happy Irish American History Month! The St Patrick's Day season kicked off in style in New York with the Consulate General of Ireland New York hosting their First Friday Networking Breakfast and welcoming one of Ireland's most inspiring figures.

Mark Pollock is an Irish athlete, innovator and campaigner who became the first blind person to race to the South Pole. He spoke on Friday morning about how he "feared I was going to have to sit on the sidelines" when he first went blind and how began on a "quest to rebuild my identity as a competitor."

Pollock more than rebuilt that identity, competing in ultra-endurance races across mountains and deserts, as well as his trek to the South Pole.

He told the crowd that the South Pole endeavor was a "graduation in the adventure world, proving to myself that I didn't have to be a spectator."

In 2010, however, after the South Pole race, Pollock was left paralyzed after falling from a second-story window. He went on to create the Mark Pollock Trust, which fundraises to cure paralysis in our lifetime. He is also the co-founder of the global running series Run in the Dark.

Informative and uplifting discussion with @markpollock at today’s #firstfriday. Thank you for sharing your story! pic.twitter.com/15T2deEuIF

Having being inspired by stories of exploration while he was finding his identity again after going blind, Pollock said that he established the Trust as a means of further exploration, looking for those around the world who were "pushing the boundaries of the narrative" about paralysis.

It was great spending the morning with the Irish in NY - I could have stayed and chatted all day! I hope a few of you will get to join us for @TheRunInTheDark in NY in November

The campaigner explained how he now uses his own story to build the relationships needed to further collaboration in curing paralysis, speaking around the world and organizing "Run in the Dark" to make "connections with people who do have the money and with people who need it" to have the most impact he can.

You can find out more about his story and how you can get involved here.

14th January 2009 - ‘By Endurance We Conquer’ - Sir Ernest Shackleton's family motto. We’d been moving over the ice for 24 days in Antarctica. 14 hours per day - 2 hours man-hauling our sledges and 5 mins rest. Approaching half way in the race phase we got news that the race had been extended by 120 kms or nearly 3 days. It was psychologically devastating and risked us missing the cut off time to reach the South Pole. Listen back to my satellite phone report from that day as I try to make sense of the news - link in bio. #2009vs2019 #10yearchallenge #10yearanniversary #southpolerace #tbt #teamsouthpoleflag #southpole #explorer #irishexplorer #adventure #achievemore #resilience #thenvnow #throwback #exploration #polarexplorer #endurance #sirernestshackleton #shackleton

The First Friday breakfasts are a staple of the Irish community in New York. They present a great opportunity to connect with the Irish & Irish-American community in the greater New York region. Attendees are offered the chance to promote an event that is of interest to the Irish diaspora in New York or simply hear the latest community, cultural and business news.

Join us at the Consulate on Friday 1 March for the next in our series of #firstfriday networking breakfasts. We will be joined by the inspirational athlete, speaker and campaigner @markpollock Sign up at https://t.co/TFR1AZqV89 pic.twitter.com/T5KH4tyCNn