Máirín Hughes, who was born in Belfast in 1914 and grew up in Killarney, Co Kerry, celebrated her landmark birthday on May 22 at Maryfield Nursing Home in Dublin. 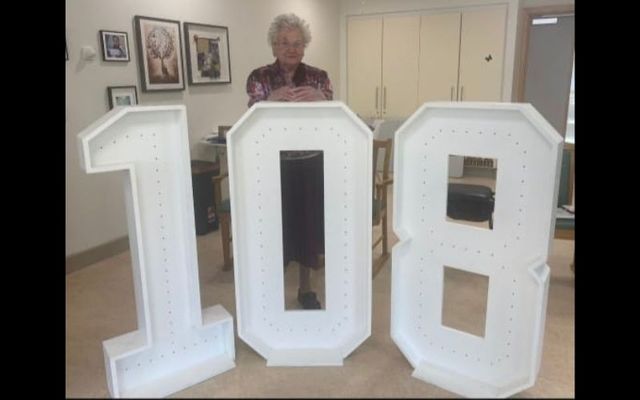 Ireland's oldest woman celebrated her 108th birthday at a Dublin nursing home earlier in May.

Máirín Hughes, who was born on May 22, 1914, just weeks before the outbreak of World War I, celebrated her landmark birthday in Dublin on Sunday, May 22.

The Maryfield Nursing Home in Chapelizod, Co Dublin, where Hughes is a resident, pulled out all the stops for the big birthday, which included a Mass, a luncheon with her friends, a visit from an ice cream truck, and entertainment from the local school choir.

“She is a super legend here,” Orla Quigg, the director of nursing at Maryfield, recently told The Kerryman newspaper. “We are very privileged to know her.”

Thank you so much to Kevin, Keeperlit Party Lights and Wedding letters for donating the numbers for Mairin's special 108th birthday in Maryfield Nursing Home . Mairin was absolutely delighted with them.

Posted by Maryfield Nursing Home on Tuesday, May 24, 2022

Born in Belfast in 1914, Hughes and her family lived in Dublin for a short time before settling in Killarney, Co Kerry in 1918.

“Killarney was lovely," Hughes recently told the Killarney Advertiser. “Our first house, I could stand inside the door and see the lakes, it was a glass door, I had never seen a glass door.

“I could see, Lough Lein, it was the lower lake, there are three lakes in Killarney and I could see them and the islands through a door.”

Hughes says she has vivid memories of the Spanish Flu pandemic in 1918 and told the Irish Times that her mother "used to look after people" who became ill in the neighborhood.

"She used to go over to an elderly couple and I would go with her to help carry food and things for them but I was made to stay outside the gate to avoid getting the flu," she told the Irish Times.

Hughes says she also has memories of the Black and Tans patrolling the streets around Killarney during the Irish War of Independence and additionally remembers the arrival of Free State soldiers during the subsequent Civil War.

Hughes moved to Cork in the 1930s to study science at University College Cork, something that was "unusual" for women at the time, although she acknowledged that she "wasn't the first".

She graduated with a BSc in 1935 before going on to work as a chemist in UCC's medical lab for 16 years.

She remained in the job until 1950 when she met her husband Frank and the couple moved to Dublin, prompting her to take up a job as a teacher.

Marking her 104th birthday in 2018, Hughes discussed her life with UCC:

Hughes now credits her longevity to "God's plan" and taking "everything in moderation."

"It’s God’s plan for you," she told the Irish Times. "I have nothing to do with it. But I remember being asked before about whether I drink. I have the odd glass. Everything in moderation."