Heartwarming story about a man, his canine best friend, and their favorite place: Belfast’s Cavehill. 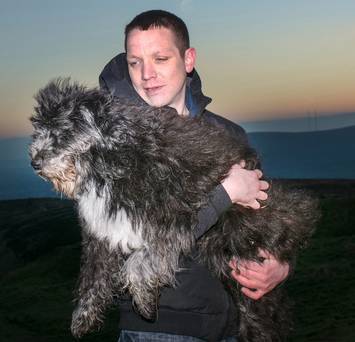 Dave along with his best friend George Dave Wright

A devoted dog owner has shared the story of his best friend and the final journey they took together up Belfast’s Cavehill, days before his dying friend was put to sleep.

Dave Wright, an Antrim man from the large town of Carrickfergus near Belfast, recently took a walk with his “best bud” for one last time to Cavehill. George, a border collie, was becoming increasingly unwell for the past number of weeks before Dave made the heart wrenching decision to have him put to sleep.

For their final walk up to the top of Cavehill, George was unable to make the journey so Dave carried him up the last leg so George could see his beloved place for one last time.

“I used to take him to Cavehill every morning and evening, he loved it there. We explored every inch of it. He's my best bud, he has never been apart from me. He's always been there. At night I used to bring him onto my bed and talk to him like a counsellor," he told the Belfast Telegraph.

For the past 15 years the pair have been inseparable, defining the relationship between man and man’s best friend. George’s favorite place to go for a walk was up to the scenic surroundings of Cavehill where you are greeted with a stunning view looking over Belfast.

George was given to Dave when he was three months old by a friend when his mother was away for a weekend. He was a shy and timid dog at first but quickly grew into the full of life character who Dave became best friends with. Since then they have done everything together and have had many wonderful adventures.

Dave holding George in his arms

"I was never allowed a dog before that, but my mum was away for the weekend so I took him home. We called him George because he was just like a human. He was quite shy and timid, but after a while he got better. Me and George went everywhere together. We used to go for a walk for an hour and a half every morning."

George would wait for Dave at the bus stop when his friend was away for the day in college and would ride with him on his scooter and motorbike on trips to Newcastle in County Down, over 40 miles away, “as soon as I started the engine he jumped on the back”.

Unfortunately after weeks of becoming increasingly sick and unwell, old age had finally caught up to George. After multiple trips to the The People’s Dispensary for Sick Animals (PDSA) Pet Hospital in Belfast, George was given steroids and special food but improvements didn’t last. Ultimately Dave had to make to heartbreaking decision to put George to sleep."The vet couldn't find his vein but when they found it and put the needle in to put him down I said to him, 'You're going up Cavehill now'. "His eyes and ears pricked up a little bit and then that was him, he was gone."

Would you like to share any memories of your favorite pet that became your best friend? Let us know in the comments below.