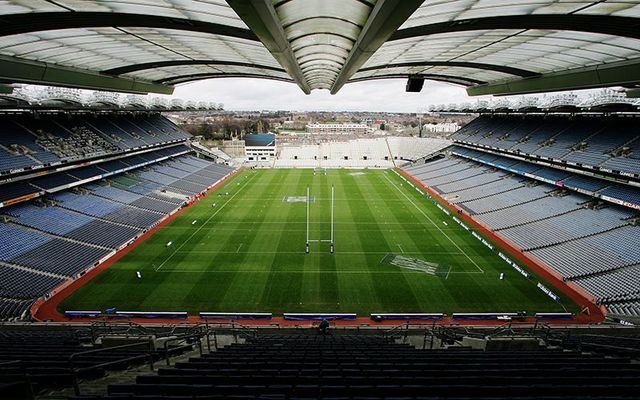 The home of the GAA in Ireland, Croke Park in Dublin. RollingNews

Limerick's early-season woes in Division 1A of the Allianz National Hurling League continued with a 0-27 to 1-18 defeat at home to Galway on Saturday night when Gearoid Hegarty’s 39th-minute red card after a melee gained as many headlines as their second league defeat in a row.

Not that manager John Kiely is fretting about the current form of the All-Ireland and Munster champions, having experienced a similar dip in form last year. He acknowledges, however, that the new Munster SHC campaign is just around the corner.

“The attitude and focus was much, much better this week than what was on show last Sunday, but we still have so much to do.  When you see the last quarter there, you realize how much work we actually have to do. We’ll knuckle down to it. We have the experience of being here before. The lads understand it can be hard, when you do come back, to get up to where you want to be. At the moment, we are not quite there, so we have to work really, really hard to get back.”

Galway continues to impress under new boss Henry Shefflin who said afterward, “The intent and intensity was very strong.  It’s February hurling, so it’s not the hurling and the skill that’s going to matter. It’s that work-rate and working for the team. It’s a team game and we saw lots of very positive play.”

Wexford maintained its 100 percent start to the season with a three-point win, 2-20 to 1-20, away to Clare in Ennis on Sunday as new manager Darragh Egan continues to make his mark on the team he inherited from Davy Fitzgerald.

Speaking to RTE, Egan declared afterward, “We’re delighted to have four points from the two games. It was a good win today. I think we’re going to learn an awful lot from that game. We struggled for long periods of the second half, Clare gave us a good bit of bother.

“Ultimately at half-time, we were a few points up and probably didn’t deserve to be. Clare had a lot of wides in that first half. In fairness to the boys though, they dug. They’re learning quickly how we want to attack the rest of this league and championship, and it’s great to see.”

With Lee Chin and Kevin Foley expected to return from injury in time for the championship, Egan’s side are in good shape ahead of a testing trip to Henry Shefflin’s Galway on Sunday, February 27.

He added, “As we head to Salthill we know exactly what the conditions can bring. It’s going to be a serious task, they were excellent against Limerick on Saturday night. We’ll have to study them over the next few weeks and be ready for the task down there.”

Ace forward Tony Kelly was absent again for Clare on Sunday as he recovers from an ankle injury but he expects to return before the end of the League. Kelly said, “I’ve about 17 weeks rehab done at the minute so just back in, I’ve a good block of running done, so I’ll be back in hurling this week. It’s all going to plan so far. I just have to ramp up the hurling, shake off the rustiness, and hopefully I’ll be back on the field pretty soon.”

Offaly found the step up to Division 1A tough enough as they went down to Cork by 4-25 to 1-15 on Sunday after losing by 15 points to Galway in the opening round of the league.

“We picked up one or two more injuries today and one from Galway. It’s tough facing a very formidable Cork team; the team they put out was very strong. I know there is a gulf there but that’s the position we’re in and we can’t do anything about that.

“We’re delighted to be playing the likes of Cork and learning from the speed of their play. If we’re an inch off we’ll pay for it. I think the lads will bring that to the training sessions and bring that on for the coming weeks.

“We’re in a very, very tough group. There’s a trend there with teams coming up from 2A. Cork got three goals early on but the boys got back into it; they could easily have dropped their heads.”

Cork boss Kieran Kingston was happy to make it two wins from two games. He said, “Any time you start the league with two wins you are satisfied. It was about putting in a performance and getting a result and I thought we did that. We set a good platform, got a couple of quick goals. It’s the first time Cork had played here in ten or 11 years.

“We’re taking it from game to game. In the last number of weeks it has been a balancing act with the number of college students we have. We are trying to build a competitive panel and have real competition for places. I think we’re achieving that.”

Tadhg de Burca’s return after over a year out with a cruciate knee ligament injury was a bigger talking point than the big winning margin as Waterford crushed Laois by 7-31 to 0-19 in their Allianz NHL Division 1B clash in Walsh Park.

De Burca hadn’t played a competitive game since the delayed All-Ireland final in December 2020 and was delighted just to be back and to be competitive again as he told RTE. “Definitely relief, even hours before the match, my first match back after 13-14 months,” he said.

“So definitely a big day for me but glad we got the win, good to see out Laois (who are) tough opponents.  Obviously, there will be bigger days ahead and we’ll focus on them I suppose.

“It’s tough going when you’re out that long but I’ve got good people around me, good physios, helping me through the rehab so I’m just very thankful towards them and the surgeon as well, Ray Moran, he did a good job.

“You’re going to get bad thoughts at times but good people around me, good support, family and friends and they’ll always be driving you and pushing you forward. I had two 40-minute games before this so that was just more so for the head and a lot of people you know who’ve done a cruciate before, the head is the big thing, trying to get the confidence back.

“So today will do the world of good for it and hopefully keep going stronger after that.”

A new look Tipperary grabbed bragging rights with their 1-19 to 1-18 win over old foes Kilkenny at Semple Stadium when new captain Ronan Maher came off the bench to great acclaim with a stunning point straight after his second-half introduction.

Tipp boss Colm Bonnar admitted, “Ronan obviously was very disappointed he wasn’t starting from the start. Our first home game and him as captain, he would have loved to have led the team out onto the field but we just felt the likes of Dillon Quirke and Barry Heffernan, they played very well against Laois and it was an opportunity for them to keep their development going.

“When Ronan came on, there was such a roar behind me from the crowd and then his introduction and what a score. It says, ‘Here I am, so don’t forget about me.’ That’s what we want, we want players coming on and making a contribution and having that kind of attitude.”

Dublin, meanwhile, were made to work hard for their 2-19 to 2-15 win over Antrim at Corrigan Park.

Substitute Harry Ruddle was the hero with the last minute injury-time goal as Waterford’s Ballygunner shocked treble chasing Ballyhale Shamrocks of Kilkenny with a 2-17 to 1-19 win in the AIB All-Ireland club SHC final at Croke Park on Saturday.

A shocked Ruddle told the media afterward, “I seen open road in front of me and there was only one thing on my mind really. I was just going to take it on because everybody was bunched around the goal, I wasn’t going to get a pass off, so I said I’d go for it. I actually didn’t see it hit the net, I just seen everybody, I just seen limbs. I just ran back out and trying to get out to position. I was expecting one more play but the referee blew it up. Best feeling ever.”

In other club results, Jerome Johnston scored the extra-time goal that made all the difference as Derry champions Kilcoo added the All-Ireland club SFC title for the first time in their history with a dramatic 2-8 to 0-13 win over Kilmacud Crokes of Dublin at Croke Park on Saturday.

*This report first appeared in the February 16 edition of the weekly Irish Voice newspaper, sister publication to IrishCentral.