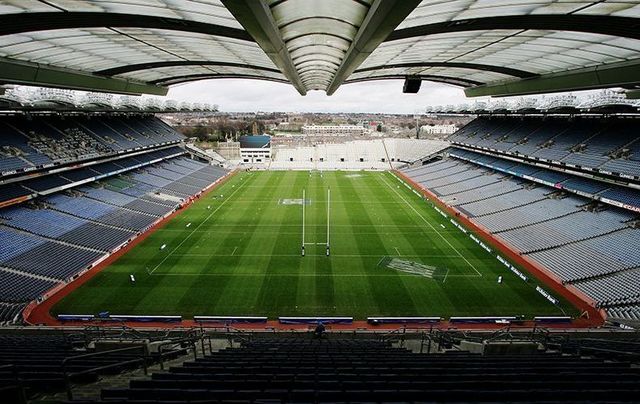 The home of the GAA, Croke Park in Dubln. RollingNews.ie

It was the classic it always promised to be as Dublin met Kerry in Semple Stadium on Sunday, a last gasp goal from a David Clifford penalty rescuing a 1-18 to 4-9 draw for the Kingdom in their Allianz National Football League Division One South clash.

Some 20 years on from a famous All-Ireland quarterfinal draw on the same pitch, Clifford’s goal capped a fine comeback for Kerry as both sides again suggested they will be around all the way to the business end of the Championship in August.

As Kerry clawed their way back from a six-point deficit, Clifford hit three points in succession in the final quarter before his goal, after a Philly McMahon foul on Stephen O’Brien, settled affairs with a share of the spoils a fairly popular outcome for all concerned.

Kerry manager Peter Keane thought so and proclaimed afterward, “I thought we put in a great third quarter. The game appeared to me to be a bit flat in the first half. Maybe Dublin mightn’t feel that but it just seemed a bit dead. I think we injected a bit of life into it in that third quarter.

“I suppose I wasn’t watching them too much but is there a feeling if you’re six points up, maybe you think the game is done? Whether that was there but I doubt that, there’s plenty of fight in them and they’re experienced players. They’re a top-class team, they’re the best team that’s there. I can’t really answer for them but I do know that the third quarter was a big quarter for us.”

Stand-in Dublin boss Dublin selector Mick Galvin reflected, “I think we got a little bit sloppy. We were a little bit slow coming out with the ball, we invited them on and they took their opportunities really well when we did.”

Galvin also revealed that goalkeeper and captain Stephen Cluxton is likely to return for the All-Ireland champions in the coming weeks after missing out on the opening two rounds of the NFL.

“Stephen is working away with Josh Moran, our goalkeeping coach, and hopefully in the next week, hopefully week and a half, two weeks, Stephen will be back with us and available for selection,” said Galvin.

“Dean Rock is back doing a bit of running and he should be available for the Galway trip, if not that he’ll be available the week after. Our priority coming into the game was to come out of it injury-free. I feel from the dressing room that we have come out injury-free on it.

“We’re looking at next week trying to get Tom O’Sullivan, Tony Brosnan and Jack Barry back in again so we’re building here. I said at the start of the league the priority was to be injury-free and to try and have everybody on the starting block for Clare.”

With a report published in Sunday’s Irish Daily Mail suggesting a crowd of 30,000 could attend the All-Ireland finals in August, Galvin is looking forward to seeing fans in GAA stadiums again.

“I think the players themselves, while they are very happy to go out and represent their counties in stadiums like today, they would love the interaction with the crowd again and the GAA being back as the epicenter of everything we do,” he said. “So I think the sooner it happens the better and I think the players are crying out for it.”

In other results, Galway bounced back from their opening day 22 point defeat to Kerry in the same group with a 2-16 to 1-13 win over Roscommon in Pearse Park.

Manager Padraig Joyce said afterwards, “I’m a proud Galway man myself and I wasn’t eating or sleeping well for the first three or four days in the week after the Kerry game. You’re hearing criticism all over the place and rightly so. I got criticized and at the end of the day I’m the manager of the team and I’m responsible for how the team plays and how they go out on the pitch.”

Division 1 North saw a draw between Donegal and Monaghan, 1-20 to 4-11, in Ballybofey on Saturday when Tyrone beat Armagh by 2-15 to 2-10 at the Gaelic Grounds.

Donegal were counting more than the loss of the win after their draw as Michael Murphy lasted just five minutes of the game before a hamstring injury forced his withdrawal with no timeline yet for his return.

Covid struck the Division 1 Group B fixture list last weekend when an outbreak in the Wexford camp caused the postponement of their game with Kilkenny and prompted a war of words with Clare after two of their players were perceived as close contacts of the positive Wexford cases from their game a week earlier.

The very confusing storyline saw Clare officials make accusations against Wexford which the Wexford County Board then refuted before the GAA got involved via Croke Park official Fergal McGill.

Played out against the backdrop of Clare’s 2-27 to 1-17 win against Laois, the row continued into Tuesday morning when McGill addressed the issue in an interview with RTE Sport as he responded to Clare’s accusations around the standing down of two of their players due to the close contact designation.

McGill insisted the decision was made by Ireland’s Health Service Executive and was not influenced by the GAA or any Wexford involvement. He said, “Only a public health specialist can make the determination of who is a close contact.

“There is a whole process they go through in determining the risk factor. That may mean looking at community factors, age or even watching video footage of a game.”

Clare boss Brian Lohan wasn’t happy with the way the story transpired over the course of the week. Speaking after the Laois win, Lohan said, “It was very unusual for us to hear that two of our players were nominated by two Wexford players as close contacts.

“Particularly, given that one of those players only came on in the 51st minute and he nominated one of our players. Everything that we do, all of the protocols, all of the Covid-related stuff is that so that if there is a case that you’d be deemed as a casual contact rather than a close contact. So, when someone nominated one of our players as a close contact, there was a good bit of anger there and frustration as well.”

With the Wexford-Kilkenny game postponed, Dublin completed the Division One Group B fixture list with a 1-26 to 1-18 win over Antrim at Parnell Park.

LIMERICK’S National Hurling League woes continued with a 1-22 to 0-21 defeat to Waterford in their Division One Group A fixture at Walsh Park on Sunday, a week after they were well beaten by Galway in their first defeat in 21 months.

Waterford avenged last year’s Championship defeat with this win and manager Liam Cahill admitted, “It’s important, let’s be honest about it. Whatever about the result, it was important that we came down here into our own field in Walsh Park and gave a really good account of ourselves.”

Limerick boss John Kiely was quick to dismiss talk of the Galway defeat and his remarks afterwards when he claimed Galway were guilty of simulation, remarks he subsequently withdrew and apologized for during the week.

After a game that saw Seamus Flanagan and Kyle Hayes sent off, Kiely insisted to the media, “Last week is a long time ago now, lads. We’ve all moved on. I didn’t see the incident with Seamus Flanagan for the first half, all eyes were on the far side.”

Cork ran riot against Westmeath in Pairc Ui Chaoimh with a 7-27 to 0-15 in their third round Division One Group A fixture.

Tipperary boss Liam Sheedy confirmed after his team’s 2-19 to 0-20 win over Galway that star man Patrick “Bonner” Maher will rest of the season after he sustained a serious Achilles injury in training last week.

The new look Mayo team secured a 0-21 to 2-12 win over hosts Westmeath in Division 2 North of the NFL on Saturday, a result that star player Cillian O’Connor feels reflects the potential of this rebuilt squad following a succession of retirements over the winter.

O’Connor scored eight points in the game and told RTE afterwards, “I don’t think that transition is a phrase we like to use. If you’re there, you are there on merit. We are trying to maintain the standards we set before. We’re delighted the lads got more minutes there this week.”

Division 3 results weekend included a 5-13 to 0-9 win for Derry against Fermanagh in Owenbeg and Cavan beat Longford by 1-19 to 1-13 in the Northern section. Offaly scored a 0-16 to 1-11 win against Limerick in the South division with Tipperary beating Wicklow by a goal, 2-12 to 1-12.

Mickey Harte enjoyed his first win as Louth manager with a 0-19 to 0-10 result against Leitrim in Carrick on Shannon in their Division 4 North game while Antrim beat Sligo by a point, 3-13 to 3-12.

*This report first appeared in the May 26 edition of the Irish Voice newspaper, sister publication to IrishCentral.