We have heard a lot lately about the evils of the Catholic Church but here is a beautiful story by Boston Globe writer Evan Allen that made me glad I’m an Irish Catholic. 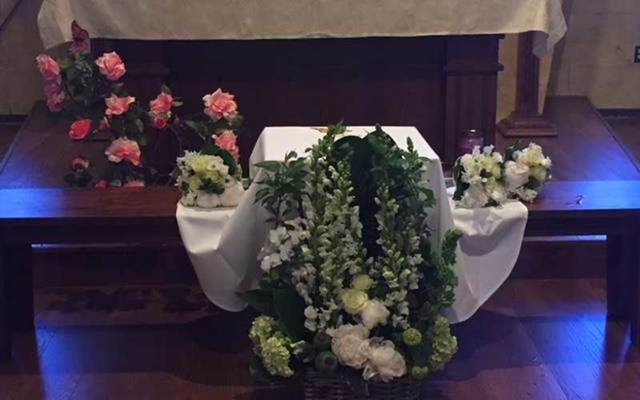 We have heard a lot lately about the evils of the Catholic Church but here is a beautiful story by Boston Globe writer Evan Allen that made me glad I’m an Irish Catholic.

Allen’s piece begins with a little white coffin, the size of a shoebox, on the altar at St. Anthony’s Shrine in downtown Boston.

There is a little stillborn girl inside the shoebox. No one knows her real name so they call her Angela, after the angels.

There is no family there for Angela. The best guess is her mother was addicted and fled the hospital after her baby died.

Instead Boston Irish Franciscan Father Robert Flaherty was there to guide the little spirit, unloved in life, home to God.

As Evans wrote Flaherty wondered: “Where did you come from, little one? He would have wanted to sit with her family, and say: Tell me how you loved her. But there was no one to ask. Whoever brought her into life had vanished without claiming her body.”

Evans continued: “But there were 23 strangers there to mark her little life one freezing winter day at the St Anthony chapel.”None of them would ever know this baby’s story. It didn’t matter. She was lost, and they had come so that she would be found.”

Her little casket was adorned with a white holy cloth bearing a cross but also some little butterflies.

Angela had died in October 2018 and the coroner's office had waited, putting the little body in the cooler, expecting a relative to come and take it away for burial.

"Her name came from a friar who lived at the shrine. Brother Paul O’Keeffe’s mother was named Angela, and she spent 15... https://t.co/H5BKqxLtDN

As Evan wrote: “And so the medical examiner called the Lazarus Ministry at St. Anthony Shrine, a Franciscan Catholic charity that has held 182 funerals and memorials for the poor and abandoned since it began in 2003. Often, the dead are adults who battled addiction, homelessness, or mental illness. But about a third are babies, mostly stillborn, whose parents — poor, addicted, incarcerated, suffering some other sorrow, or simply unknown — left their bodies in the custody of the state. No one at the ministry knows anything of the babies’ parents. But they pray for them.”

First the body went to Dolan's funeral home where the Dolan family prepared it for burial at no cost.

Embalmer Bill O’Brien said he tried not to think of his three girls and a boy as he washed the tiny body and dressed her in a diaper, a onesie, a white dress, and a hat.

Then on Jan. 25, funeral director Jed Dolan brought her in her shoebox coffin to the Franciscans. In her coffin he placed a knit blanket over the body and a teddy bear beside her and closed the casket lid.

The service was private. The mourners were friars, shrine staff, and donors. Alice Megna sang and as she did she remembered her little grandson, all of two years old, who had died of cancer.

Father Richard Flaherty spoke “Angela, we never got to meet you. And yet we meet you now as our sister.” May you now know peace and happiness and contentment.”

Angela was also the name of Franciscan Brother Paul O’Keeffe’s mother who sent 15 years helping the dying in a hospice.

Read More: Former head of Ireland’s largest university to be elevated to sainthood

Alice Megna sang the song she sang to her grandchild every night as he lay dying.

This, folks is what religion and goodness is all about. This humble priest and noble flock are doing what 100 cardinals dissembling and arguing could not achieve, bringing Christ’s love to those who need it most.

May Angela rest in peace.