Fiona Byrne Ryan, 32, sold her Detroit real estate business in February 2021 and moved to the woods in northern Michigan last October with her husband Brandon Garlow and their two-year-old son Dasan. 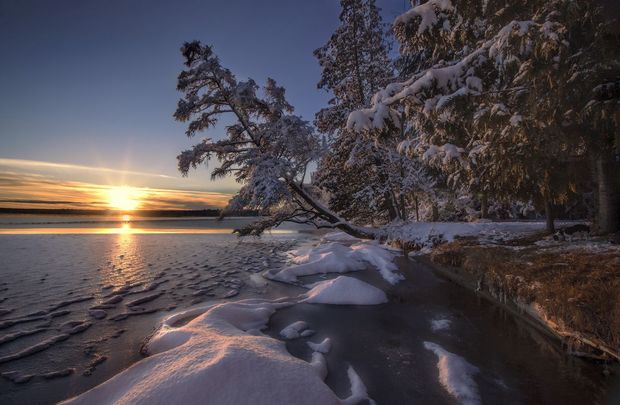 Off the grid! Irish woman and her family are living in snowy Michigan.

A Dublin woman sold her home and business in 2021 to live full-time in a tent in Michigan with her husband and two-year-old in order to get back to basics.

Fiona Byrne Ryan, 32, sold her Detroit real estate business in February 2021 and moved to the woods in northern Michigan last October with her husband Brandon Garlow and their two-year-old son Dasan.

Fiona, who studied landscape architecture at UCD, traveled the world after her graduation and found herself couch-surfing across the USA.

She met Brandon, who is Native American and part of the Mohawk tribe, in Detroit and the couple ran a real estate business that served the elderly.

However, the outbreak of the Covid-19 pandemic gave the couple a chance to reflect on life, leading them to conclude that their business left them feeling unfulfilled.

Spotlight: In 2021, Dublin woman Fiona Byrne Ryan sold her home and business to live out of a tent full-time in Michigan, North America with her husband Brandon Garlow and their two-year-old son Dasan.
Why? Their valueshttps://t.co/XN1ACJLXQ5

"We collected the largest pay cheque we'd ever collected and we were left feeling empty. That was a wake-up call," Brandon told the Irish Examiner.

The couple began exploring potential new lifestyles, including returning to Brandon's tribe in upstate New York and living out of an RV.

"We'd made so many conscious decisions, we were growing our own food, we had a share in a cowherd to get our own milk, we were refilling everything - doing all of these things but we couldn't really be in our values," Fiona told the Irish Examiner.

In July 2021, the couple attended an online summit featuring Winona LaDuke - a former Green Party vice-presidential nominee who is on the frontline of the "Stop Line 3" movement in northern Minnesota.

"Line 3" is a pipeline with the potential to carry one million barrels of crude oil from Alberta, Canada, to Wisconsin.

The route crosses 227 bodies of water, including many rivers that feed directly into Lake Superior.

Fiona and Brandon decided to sell their home after hearing about the pipeline and planned to travel 900 miles to Minnesota to join the resistance.

However, that was not practical with a young toddler.

Instead, the couple decided to run 227 miles of the North Country Trail to represent the 227 bodies of water that the pipeline will cross.

"When we were running through the forest we were alone and you had to face yourself in a way you've never had to do before," Brandon said.

"The first tent that we were living in was very thin, especially when the cold came in," Fiona said, adding that temperatures plummeted as low as -17C on certain mornings.

"We asked ourselves: 'Do we want to continue to do this?' If we wanted to stay here we would need to upgrade to a four-season tent and get a wood stove."

Even with a wood stove, however, the nights and mornings remain exceptionally cold.

They keep all electronics in a special plastic bag to prevent them from freezing overnight and spend their evenings warming themselves by the fire.

They have joined a local YMCA gym where they can wash and exercise and where Dasan can attend play groups. They also use a local library, which is especially useful for internet access.

Brandon and Fiona have started an online community called Truthfully Living, providing articles, workshops, and classes about their experiences.