The Emerald Isle Immigration Center in NYC unveiled plans for a massive renovation and expansion project which is due to begin in spring 2022. 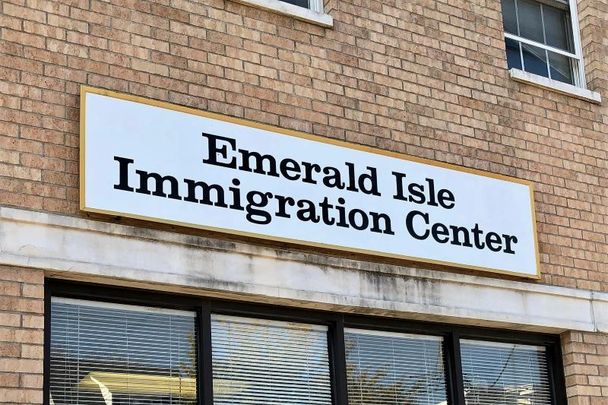 The Emerald Isle Immigration Center's facilities in the Woodlawn section of the Bronx are set to get a major overhaul. Kerry O'Shea / IrishCentral

Siobhán Dennehy, the Executive Director of the EIIC, John Tully, Chairman of the Board of the EIIC, and Daniel Dromm, NYC Council Member, spoke with the press on Thursday at the EIIC's location on Katonah Avenue in the Bronx.

“This is a huge, dynamic project,” Dennehy said. “It’s a $2.8 million contribution which is going to transform this building into a dynamic, full service, totally accessible, immigration community center fully fit for purpose.”

The project, which is set to begin in springtime 2022 and will take an estimated nine to twelve to complete, will add a third floor to the building, renovate the currently unused second-floor space, and add an elevator to make all levels fully accessible.

The completed four-floor space will feature program, community, and office space, as well as a training lab and library, private client meeting rooms, and new finishes and furniture throughout.

The project has secured $1.55 million in New York City Council funding, as well as support from the Irish government, the Irish Institute, the Tara Circle, the Dormitory Authority of New York, and private funders. Dennehy noted that there will be some community fundraising efforts as well.

On Thursday, special mention was made of Council Member Dromm's efforts in securing funding for the project.

“Councilmember Dromm has been a champion of this project from the outset,” Tully told the press. “At every turn when we faced adversity or faced problems, Danny’s been there to help us.

"For over two years now, he has been able to allocate the lion’s share of the funds that will enable us to get this project going.”

Dromm has been a member of the NYC Council for 12 years and will meet his term limits at the end of this year. He is the Finance Chair for the Council, as well as the chair for the Irish Caucus in City Council.

Speaking on Thursday, Dromm said: “It is really a great honor for me to be here today, it’s something I’ve looked forward to for a very long time."

He added: “Being of Irish descent, this is a very proud moment for me."

Dromm said he and his team frequently send constituents to the EIIC's Woodside office and he is always confident that, no matter their background, they will receive the immigration services that they need.

Of all the organizations he has worked with, Dromm says EIIC is “the best” and praised its “quality services.”

“When they came to me for funding from the city, I was more than willing to do it,” Dromm added.

A representative from Council Member Eric Dinowitz’s office was also on hand on Thursday to present the EIIC with a citation acknowledging the organization’s hard work.

About The Emerald Isle Immigration Center

The Emerald Isle Immigration Center (EIIC) is a not for profit entity created to exercise and protect the privileges and interests of the community; to foster a healthy interest in the civic affairs of the community, to help immigrants acquire US citizenship, and to inquire into civic abuses and seek reformation thereof.

The EIIC provides free programs and services to the Irish diaspora and immigrants from more than 70 countries. Between its Bronx and Queens outposts, the organization reaches approximately 35,000 clients.